Lighthouses, the picturesque structures dotting coastlines the world over, date back to antiquity.
The necessity for safe navigation often over-rode military operations, so there's very little information about the role of lighthouses during wartime.
In my quick Google search extensive research on this subject, I came across two instances of raids, or attacks directed at lighthouses during World War II:
The Estevan Point Lighthouse Attack by the Japanese submarine I-26,
and the British commando raid against the Les Casquets Channel Island Lighthouse during Operation Dryad.
But the lack of anti-lighthouse actions didn't stop Warlord Games from providing some colorful terrain to include in tabletop battles.
Here's an example of their "typical Atlantic" lighthouse paint-scheme:

And one with an alternate style: 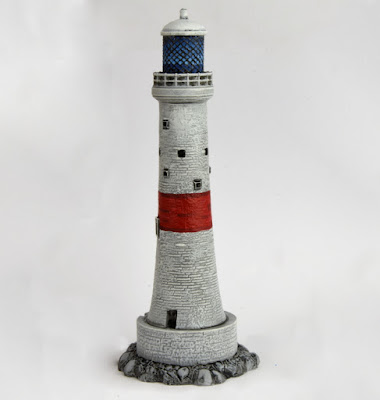 Two official scenarios include lighthouses, even though they're not the objectives:

The Battle of Sukho Island.

Lighthouses in the Mediterranean Sea had a slightly different look, like the Cabo de Palos lighthouse in Spain:
And here's Warlord Games version of a "typical Mediterranean" lighthouse:

I bought both styles, feeling I'd need a break from painting and assembling miniature ships.  Both models come in two pieces that can be easily trimmed and superglued. 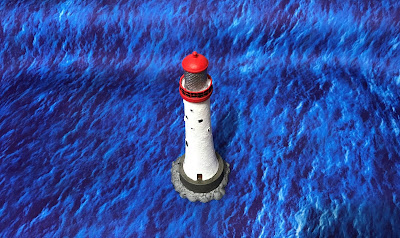 ...the most difficult part being the cupola, lantern panel and gallery as identified by this cut-away schematic:
It took me two attempts to paint these features.  I found it best to wait until I could focus exclusively on specific sections as opposed to attempting to include them in an overall paint job.
The Mediterranean Lighthouse on the other hand was one of the most difficult figures I had to paint, particularly the base.
I rarely use white in my painting projects and I found it an unforgiving color to work with.  I'd mis-stroke painting the window frames, trim and shutters.  This would require multiple coats of white paint to cover up.
After several coats of touch-up work, I quickly settled for finishing the building at "tabletop quality."
Here's a front view of my finished Mediterranean Lighthouse: 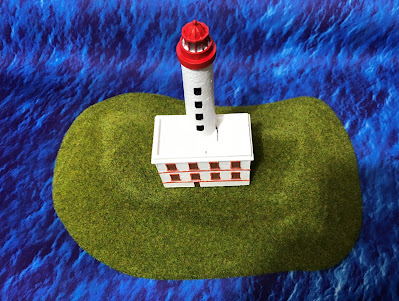 And here's the back view: 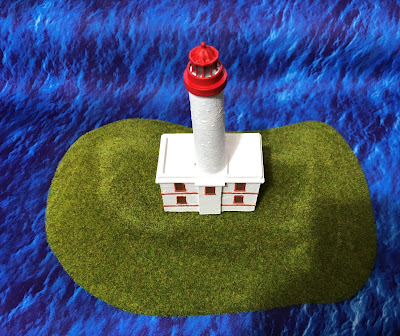 I'm not quite done with my lighthouse work.  I currently have a ruined version of the a ruined "Atlantic style" lighthouse, by Warlord Games, and a ruined Mediterranean version on back order.
While I'm satisfied with my work on these, they were difficult enough for me to paint.  So I'll most likely contract-out the job of painting the ruined versions of these two figures to other gamers.
Posted by Ted Henkle at 12:30 AM