Last week, I wrote a much-belated post about our annual Enfilade! convention.  From the initial reports on the NHMGS Facebook page, attendance was at a record high this Memorial Day Weekend.  I hope this is the harbinger of an upward trend in the tabletop gaming hobby.

Due to my work schedule, I wasn't be able to attend the whole event, but one of the two games I managed to participate in was the SAGA Tournament, hosted by Sven Lugar.

Normally, I'm not a tournament competitor, but this year I was motivated to sign up, because of my recent Dark Ages figure purchase nearly a month ago.

I read the rules--twice--along with two of the supplements, Northern Fury and The Raven's Shadow.  That was the extent of my "battlefield prep."

The weekend prior to the convention, I found the time to organize a six-point warband, with an additional point Sven allowed us for tactical flexibility.

Dan's former collection consists primarily of Welsh, who according to the SAGA rules are very adept at guerrilla-style warfare.  Since this would be my first time ever playing the game, I felt the hit & run tactics employed by the Welsh would be just my mug of mead.

After I mustered my warband, the writer in me took over, and decided my miniature minions needed a place somewhere in Welsh countryside to call home.

And so...With the help of the University of Wales translator, Biswail Swp Tyno--Dung Heap Dale--was founded.

This hamlet is based on the Orc Village model I unearthed from my collection, seen in the lead image, was made by Games Workshop way-back-when (a poetic expression of saying it's been out of print for years).  This terrain piece hasn't seen the light of day in any game session--ever--for two decades, at least.  I felt it was high time it made it's debuted appearance...

...Before I go on though...I know translating a language is more than inserting a foreign word for a native one.  Using the university's translator, I selected individual words that struck my fancy, and spliced them together in a manner that seemed to roll off my non-Welsh tongue the best.  I'm sure I butchered the language, so my apologies in advance to anyone of Welsh descent, or currently living in Wales who happens stumble across this blog...

...And now to continue...This unworthy a collection of hovels was desperately in-need of an equally unworthy nobleman/warlord, or uchelwr, to lead it and it's not-so-valiant defenders.  While scrolling through Behind the Name's site, I came across "Culhwch," who was quite a hero of Welsh mythology.

I certainly wouldn't be so presumptuous to think my wargame warlord would arise to become the stuff of legends.  But what stood out to me the most, was that the meaning of his name has something to do with pigs.

This was too good to pass up...And lo!...My main miniature was thereby christened Culhwch.

How the legendary Culhwch earned his name may be lost in the mists of time, but there are a few facts we can extrapolate.  For instance, it's well known even in this day of air fresheners, handi-wipes, and hand sanitizers, that pigs exude a stench industrial-strength solvents can't smother.  Coming from a place known as Dung Heap Dale then, I think it's safe to assume this noble's ignoble title, y Drewllyd--the Foul, or Evil Smelling--will cling to him, like stink on...well...dung.

The result of all this internet trolling exhaustive research, now gives our aromatically-challenged hero the mouthful moniker of ("am" in Welsh):


When exactly "Stinky C" ruled Biswail is uncertain.  Back in the Dark Ages, the only folks concerned with actual dates were monks who busied themselves scribbling texts in Latin.  So we could find Culhwch repelling, (which may not always be the same as fighting), all sorts of interlopers and despoilers of the fresher Welsh pasturelands.  But despite the uncertainty of the year--and the ability to attract swarms of flies--"Stinky C" managed to managed to attract competent fighters to his begrimed banner.

First and foremost, are his teulu, or bodyguards, often referred to as hearthguards during this era. For the Welsh, these guys were often a warlord's kinsmen.

Cuhlwch's teulu is 12-man strong band divided into three groups of four men, that are worth one point each in SAGA game terms.

Now according to the these rules, the Welsh were primarily armed with javelins, or throwing spears.
This includes the warlord and his hearthguard.  The figures I have representing Cuhlwch and his kin, were previously used in Warhammer Ancient Battles (WAB) games, that employ a different set of game mechanics.  I can't help but think these guys look more like Alexander the Great's sarissa-wielding Macedonians, then the nimble insurgents of the Welsh hinterlands.

Well as long as it's okay with any would-be opponents, I'll just say these guys are carrying very-very long javelins...

...But whether or not the hearthguard's spears measure up, the next group down the food chain are the priodaur or freemen.

These guys are the standard warriors, and usually make up the bulk of a warband's troops.  Culhwch has two groups of priordaurs, which are organized based on the type of shields they're carrying.

The first group, seen above, are the Cychres Tarians, or  the "Round Shields."  I know it's not very imaginative, but the name does sound cool in Welsh.

I did this so my simple mind could keep track of who's who in the heat of medieval mayhem.

Both units consist of eight warriors and cost a point each.  Massed together, they almost look formidable:


Lurking at the bottom of Biswail's food chain reside the bonnedig, or peasantry.

This literal dirty dozen, are armed with bows, a weapon much despised by "true warriors" and only considered fit for hunting.  But despised or not, these boys are Culhwch's skirmishers, and worth another point.

This brings Culhwch's force to a total of six points, which is what a typical SAGA tournament force costs.

With the additional point Sven allowed us, (for a total of 7), I mustered another group of spearmen (which again, will be considered javelins for game purposes) :


Now these guys aren't carrying shields.  So in the spirit of tactical flexibility for any SAGA games, I'm leaving it open as to whether they're freemen or peasants.  The above picture shows 12 men ready for action--or more likely--ready to hurl their javelins before running away.  If I ever feel I need quality over quality, then this shield-less unit will consist of only eight men. (In SAGA, one point will buy you 4 x hearth guards, 8 x warriors, or 12 x levies).

No matter what step on the social ladder these lads occupy, they're known as the Dim Tarians, the "No Shields."

By now, you're probably wondering whether a man such as Culhwch y Drewllyd and his band of medieval misfits could have ever existed.

Allow me to put any such debate to rest.

Feast your eyes upon the recently discovered photoshopped picture authentic image of the Biswail Swp Tyno Tapestry, showing Culhwch and his entire warband arrayed before the village gate: 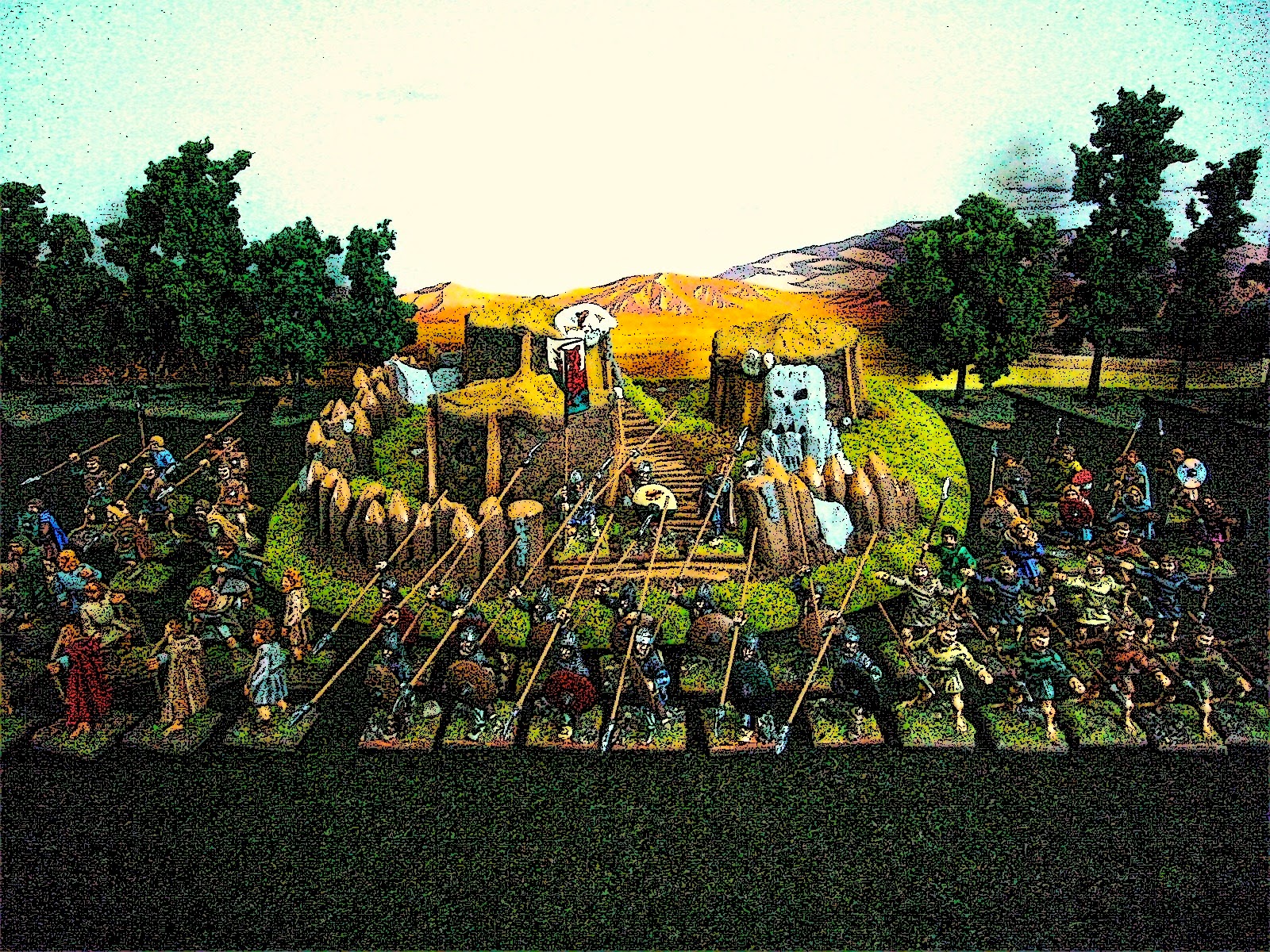 As to how well this warband do during the Enfilade! SAGA Tournament:

That, dear readers, is a saga for another day...
Posted by Ted Henkle at 7:30 PM

Thanks! I used the "Ink Sketch" effect through a program called Paint.Net. It's a free "poor man's PhotoShop" download.

your dictionary is a mess:
cylch is circle
sqwar is square, there is a hat on the a
targed is a better word for shield - plural targedau
priodaur implies the guys are married uchelwr or bonheddwr is better

Hi Grayde! Thank you for reading my blog post and for your corrections.
I apologies for not catching your comment until now.

According to ImTranslator, the last portion of your comment is:

"I do not think that the author of the rules' may know nothing about Welsh."