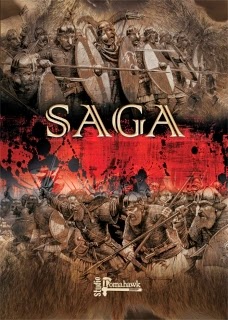 Normally, I'm not prone to impulse buying.  However, when my friend Dan, one of the many talented miniature painters I know, offered to sell his Dark Ages collection at a "garage sale price," it was:

Damn the budget and full speed ahead!

I haven't had the time to do a full-stage photo session, but I promise I'll do so as soon as possible.  In the meantime, here's an overview of my new acquisition: 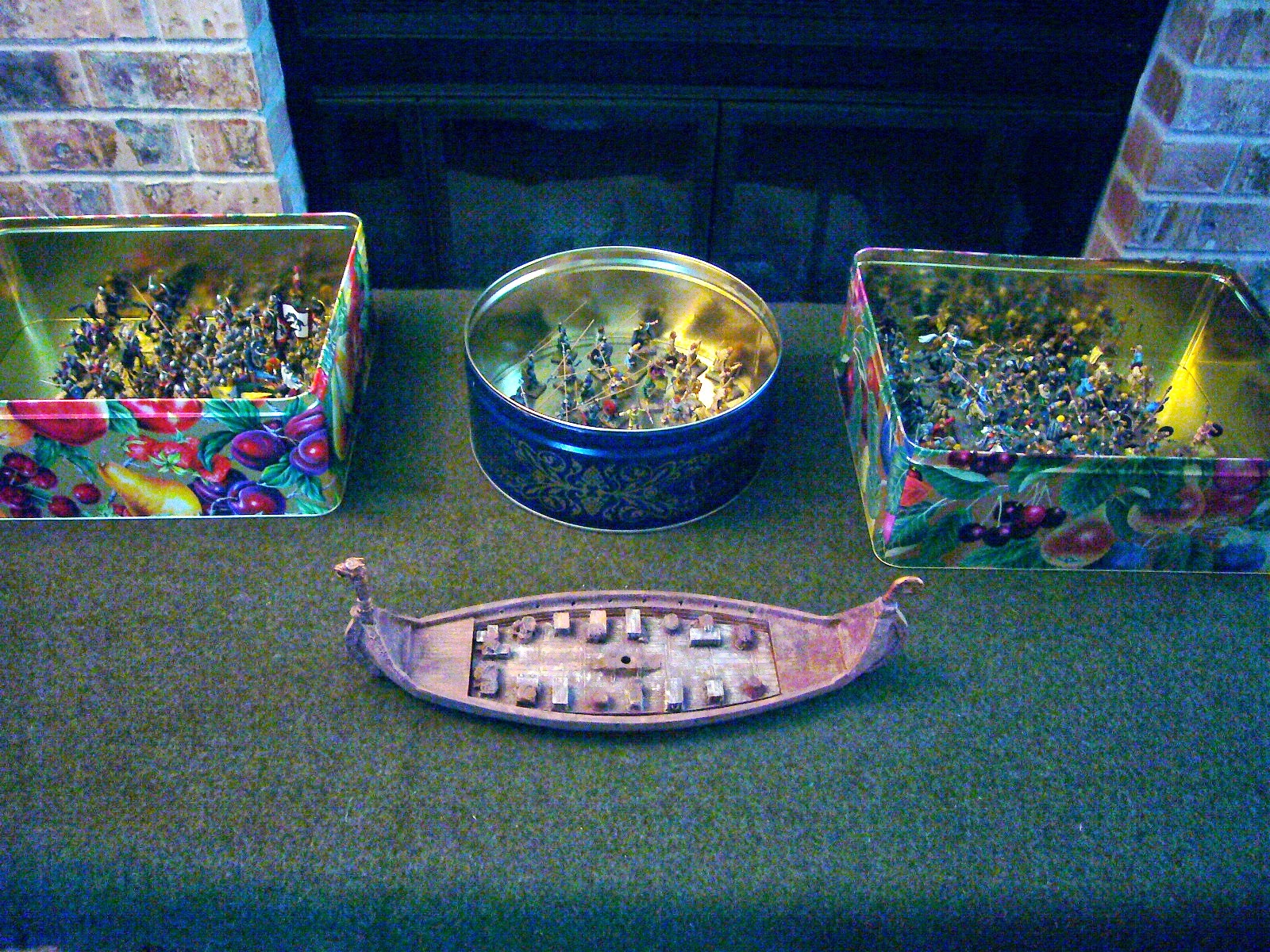 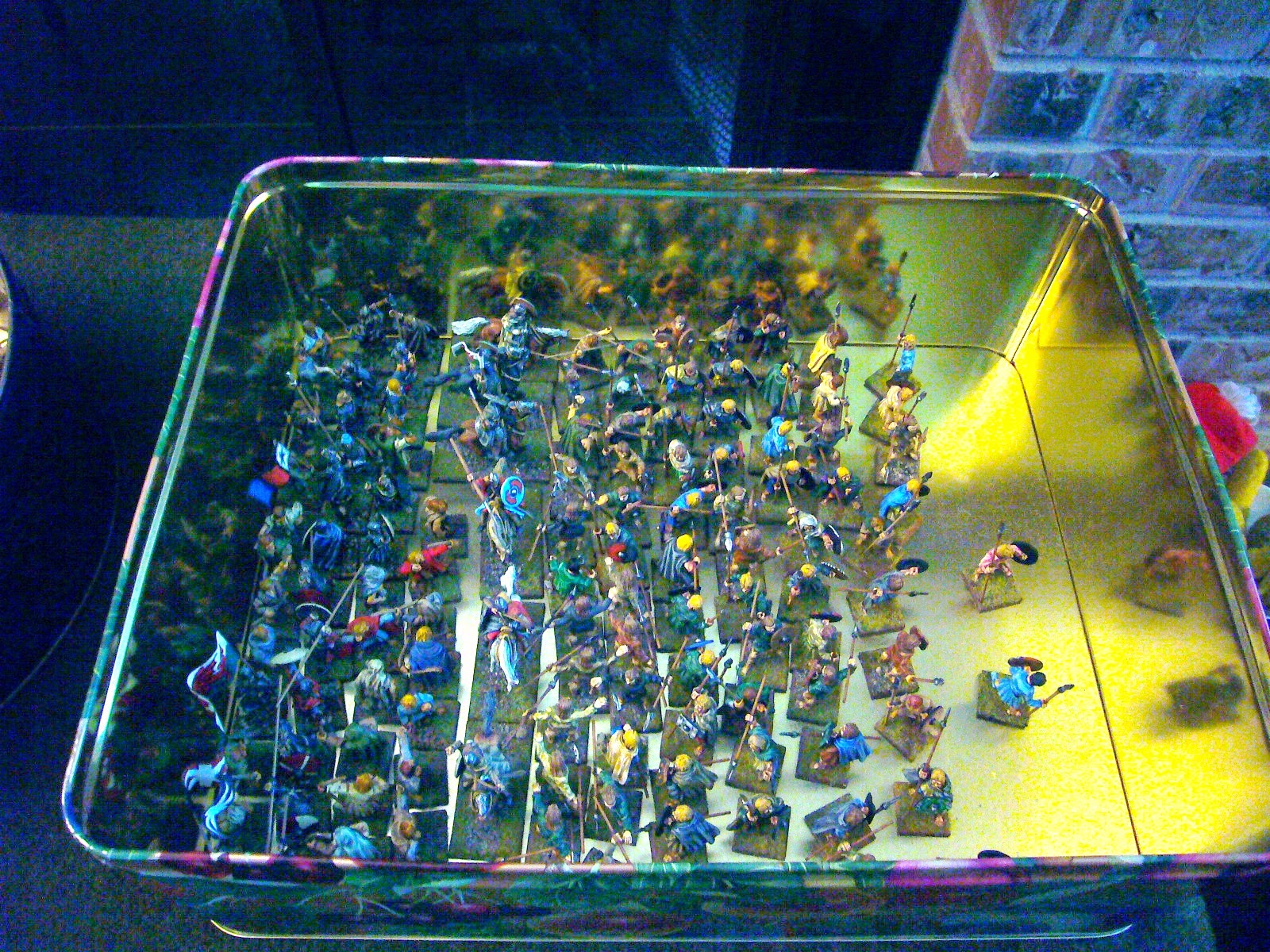 ...while this container houses more Welshman, along with some Norsemen: 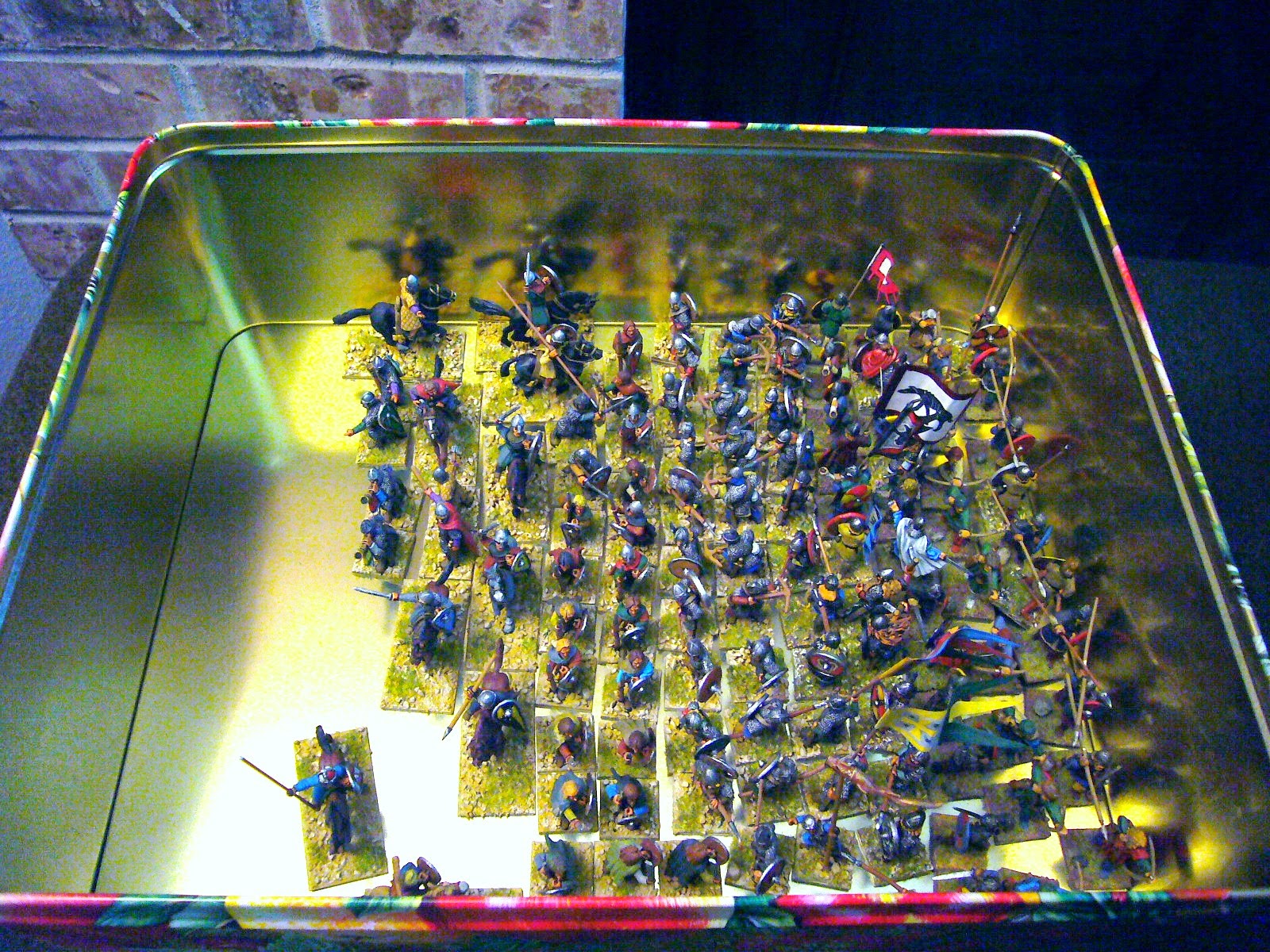 About a year ago, I bought a small Welsh warband Dan was selling, which is now re-united with the rest of their comrades-in-arms: 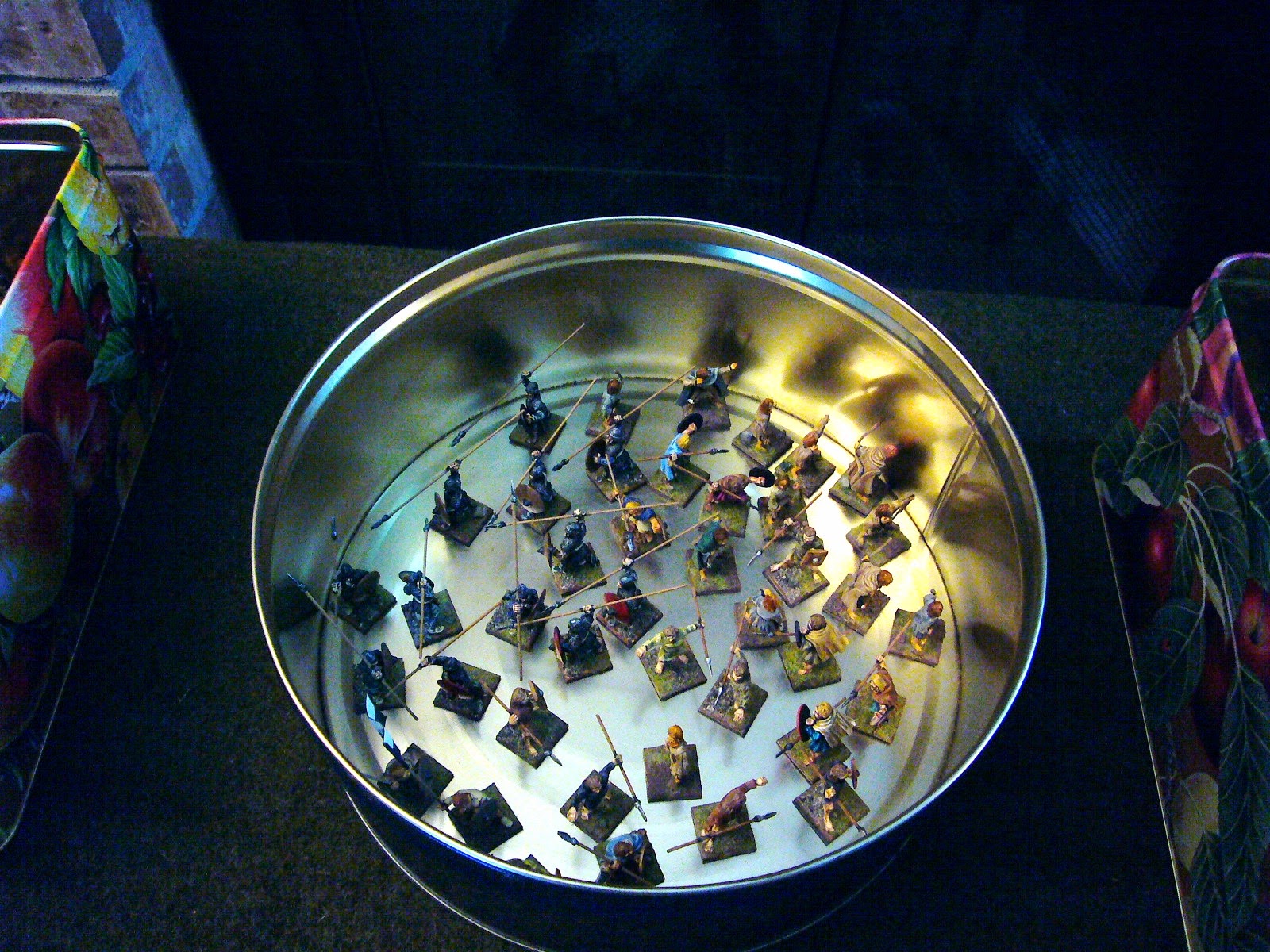 In addition to being a top-notch painter, Dan added magnetic strips to the bottom of each figure.  This way miniatures stay-put inside the metal storage containers.

The biggest surprise, came when I opened an oblong box from Merrimack Miniatures (No Old Glory Miniatures), which contained this beautifully painted longship: 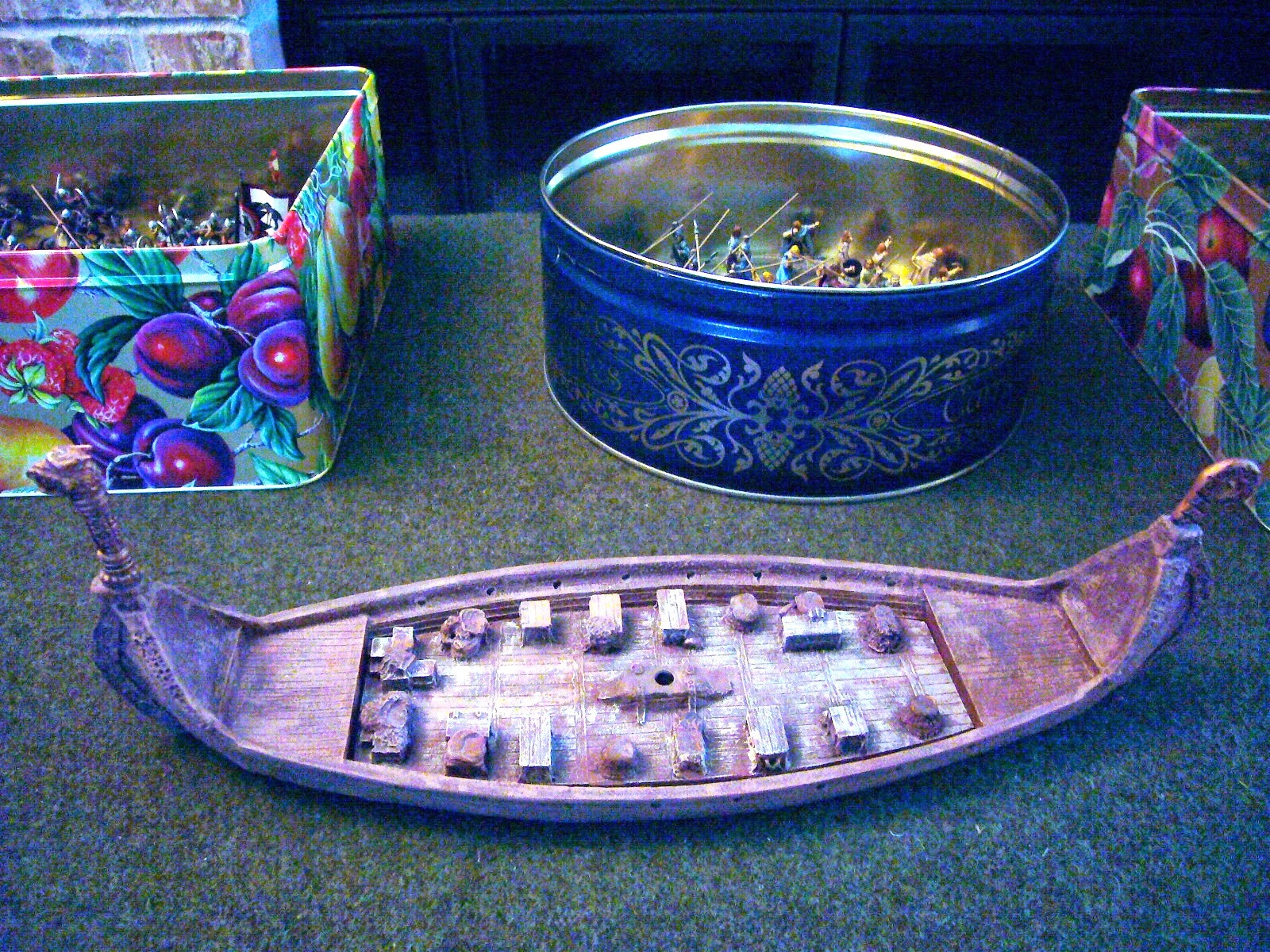 Dan didn't tell me he was including this in the deal!  I could have been knocked over by a raven's feather.

It even comes with a "cleared deck" or "rowing deck" option: 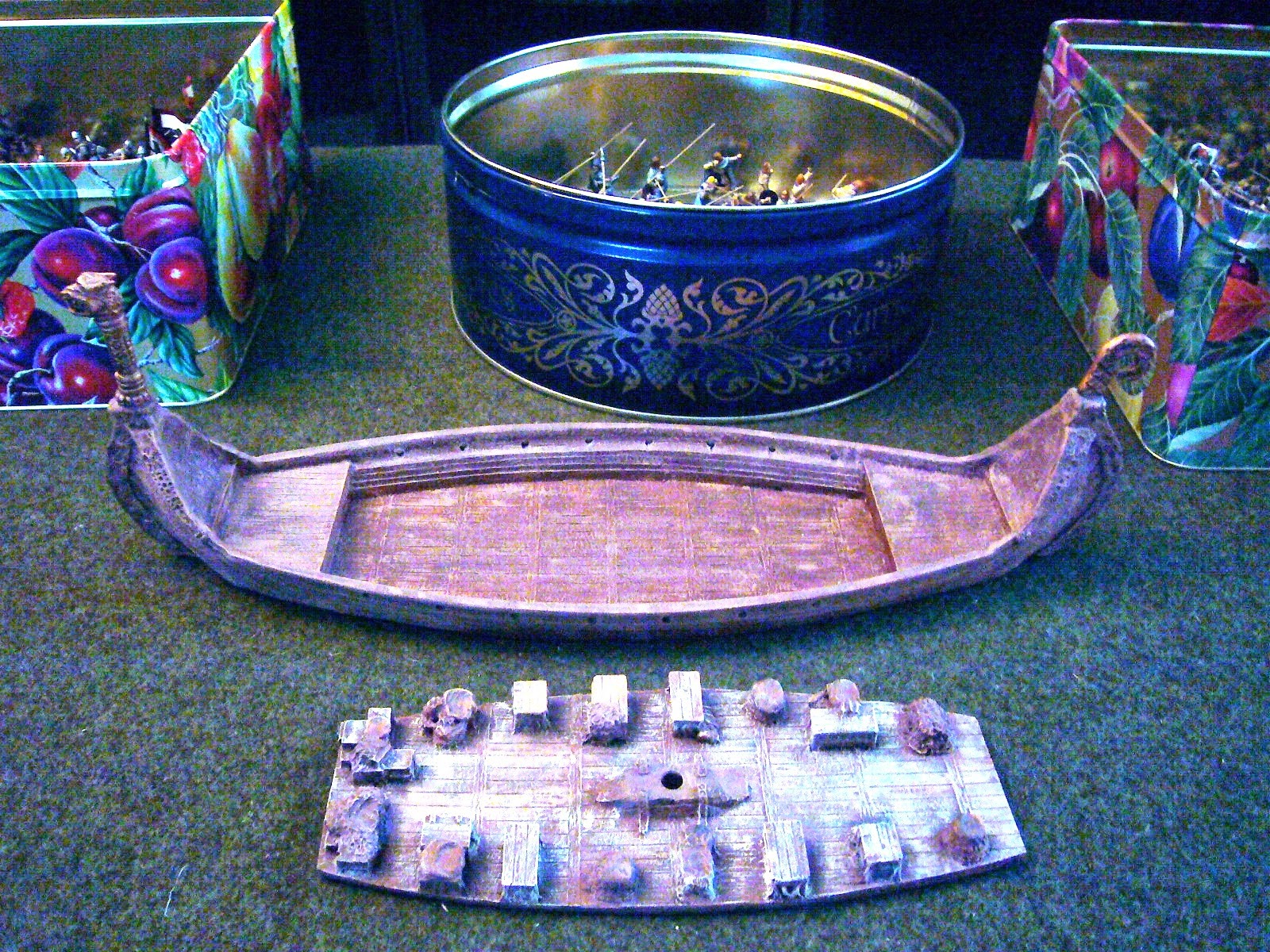 And these were just the painted figures.  I've got a bunch of unpainted miniatures, which to be honest, I don't have the time or talent to paint at the moment.  Although I'm definitely hanging on to the unpainted longship crew, and two-figure special of Brian Boru (mounted and on foot).

While some of my friends still play Warhammer Ancient Battles (WAB), and Dan threw in a few supplement books, others have moved on to the new skirmish-level game, Saga. 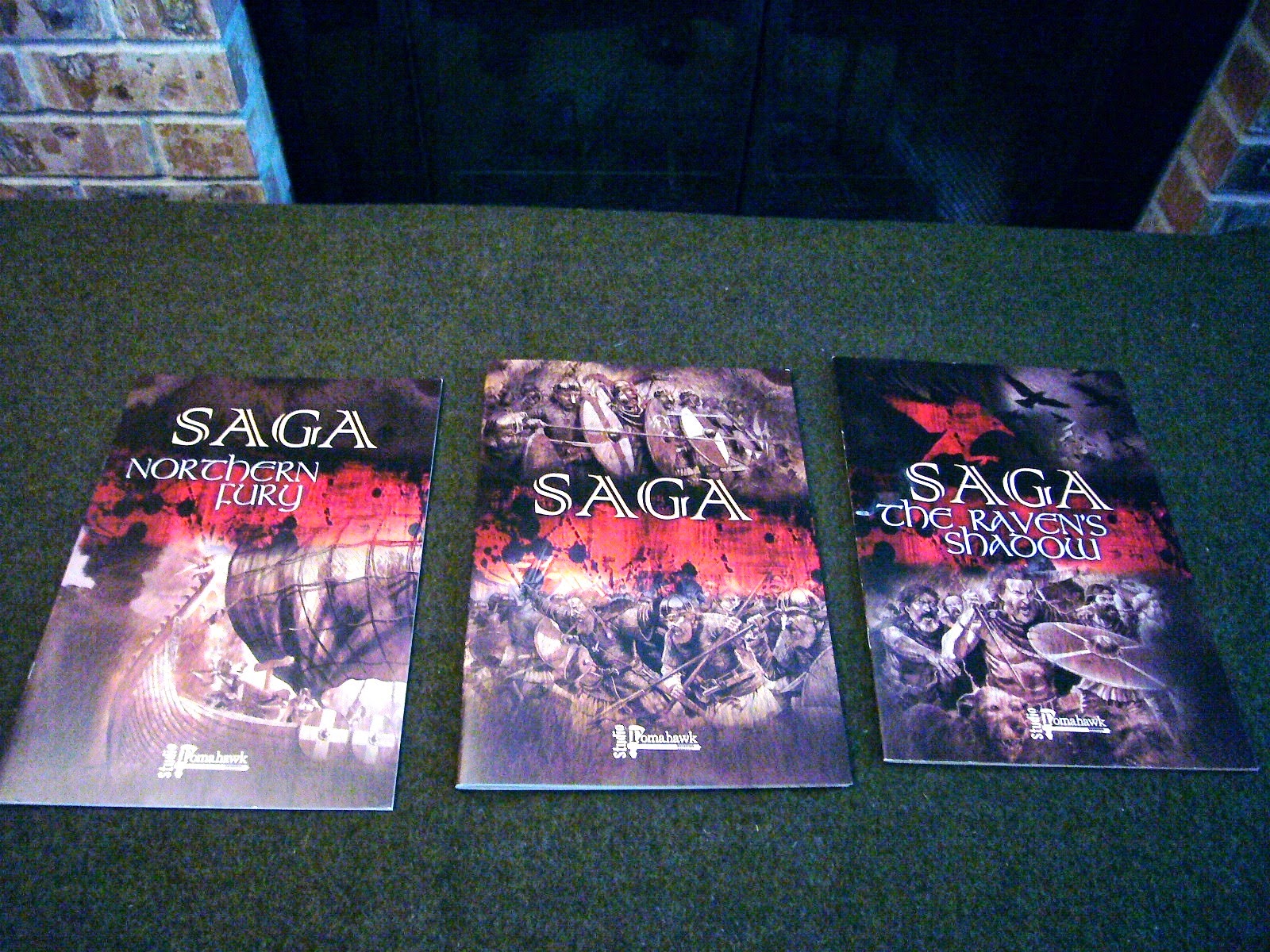 "Skirmish gaming" means one figure represents one individual, rather than scores, or even hundreds of men, common in larger scale (big battle) miniature games.  So you don't need umpteen figures to fight a battle.

Saga also has a unique command & control system, which uses battleboards to determine what actions a would-be warlord can make, depending on the roll of his specialized Saga Dice.  Here are the Anglo-Danish and Viking battleboards and dice, which are two of the four factions included in the main rulebook: 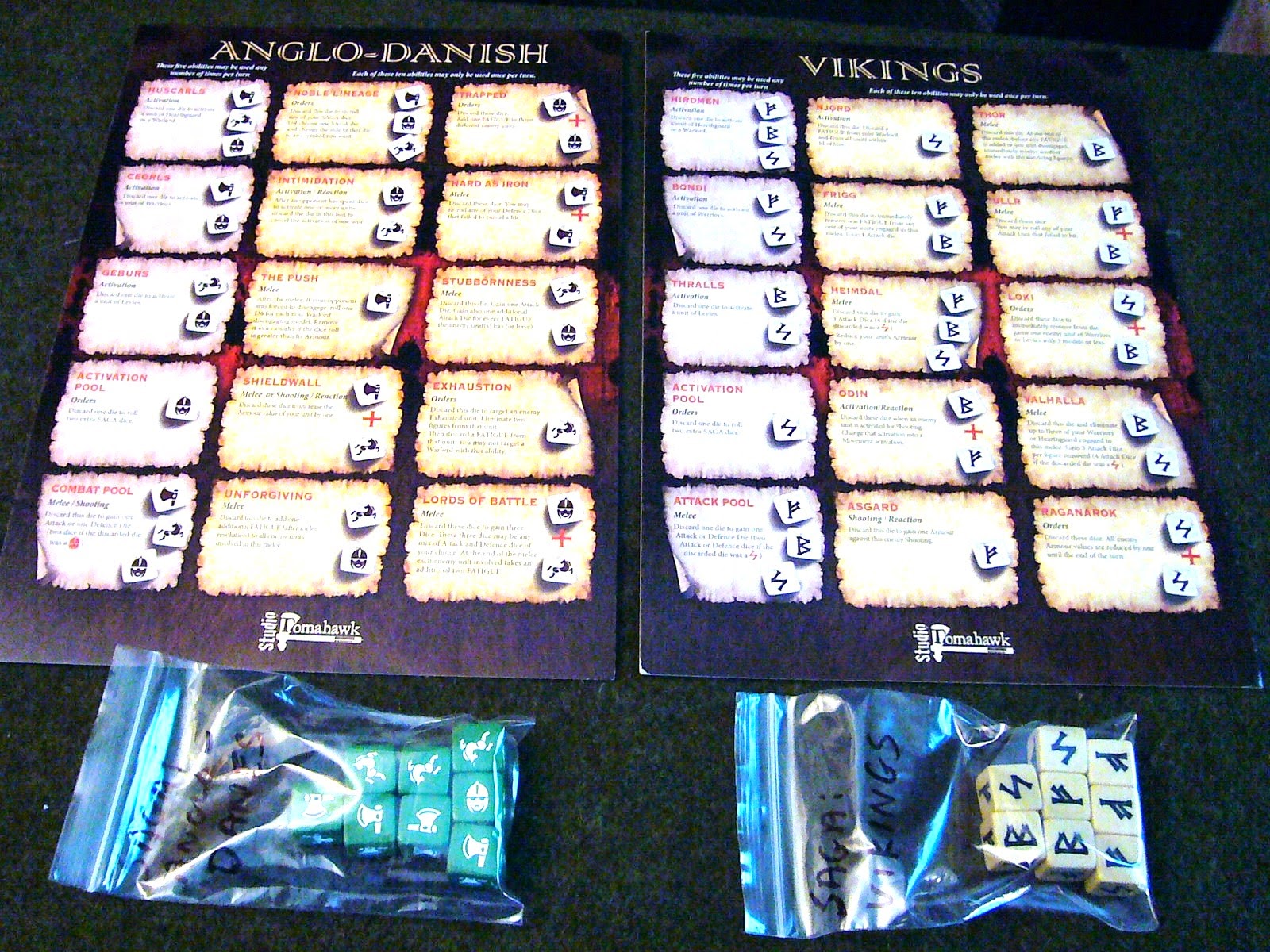 The other two factions are the Normans and Welsh: 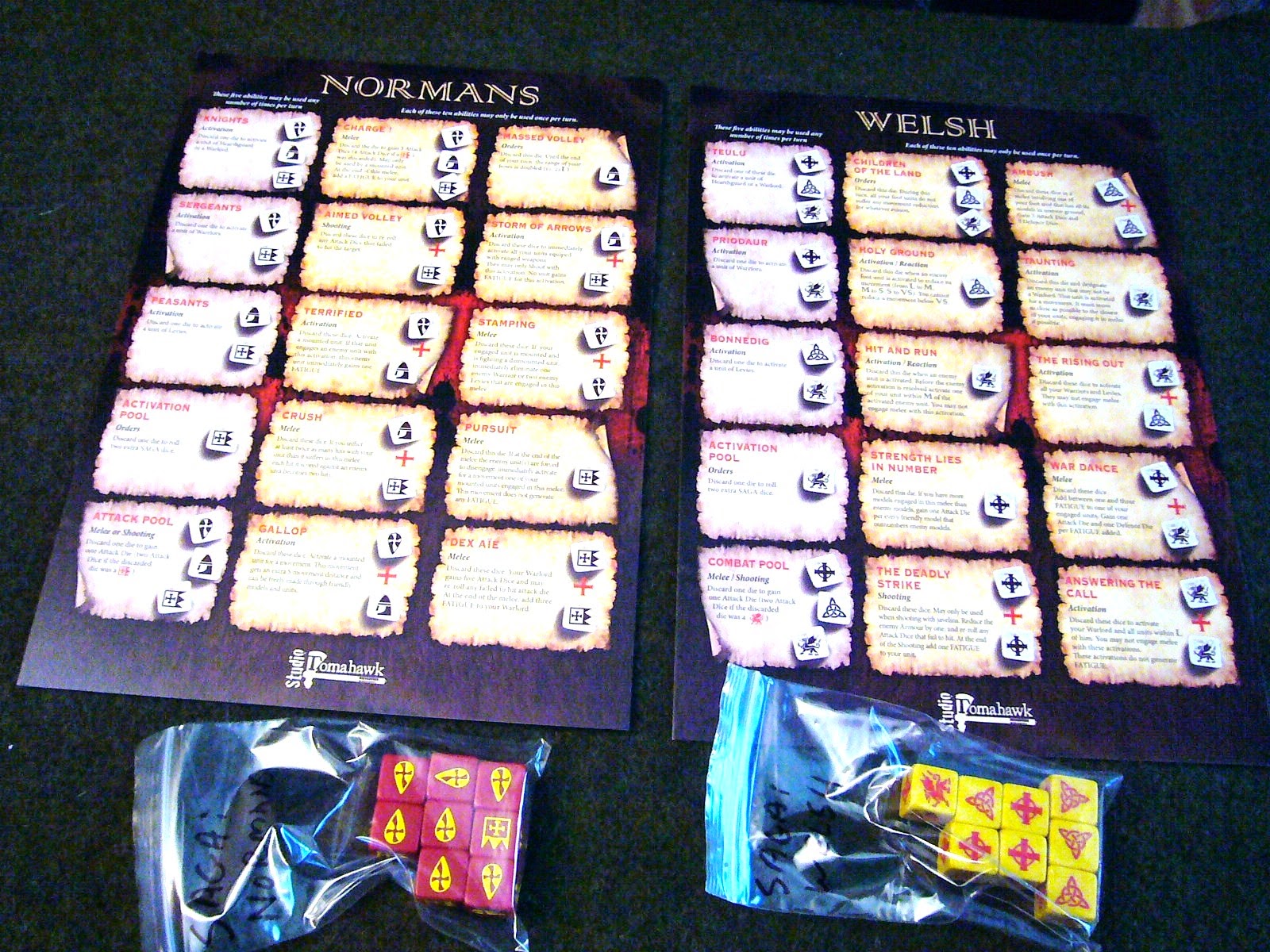 Northern Fury was the first Saga Supplement produced, which added the Scots, Bretons, Anglo-Saxons and Jomsvikings to the mix: 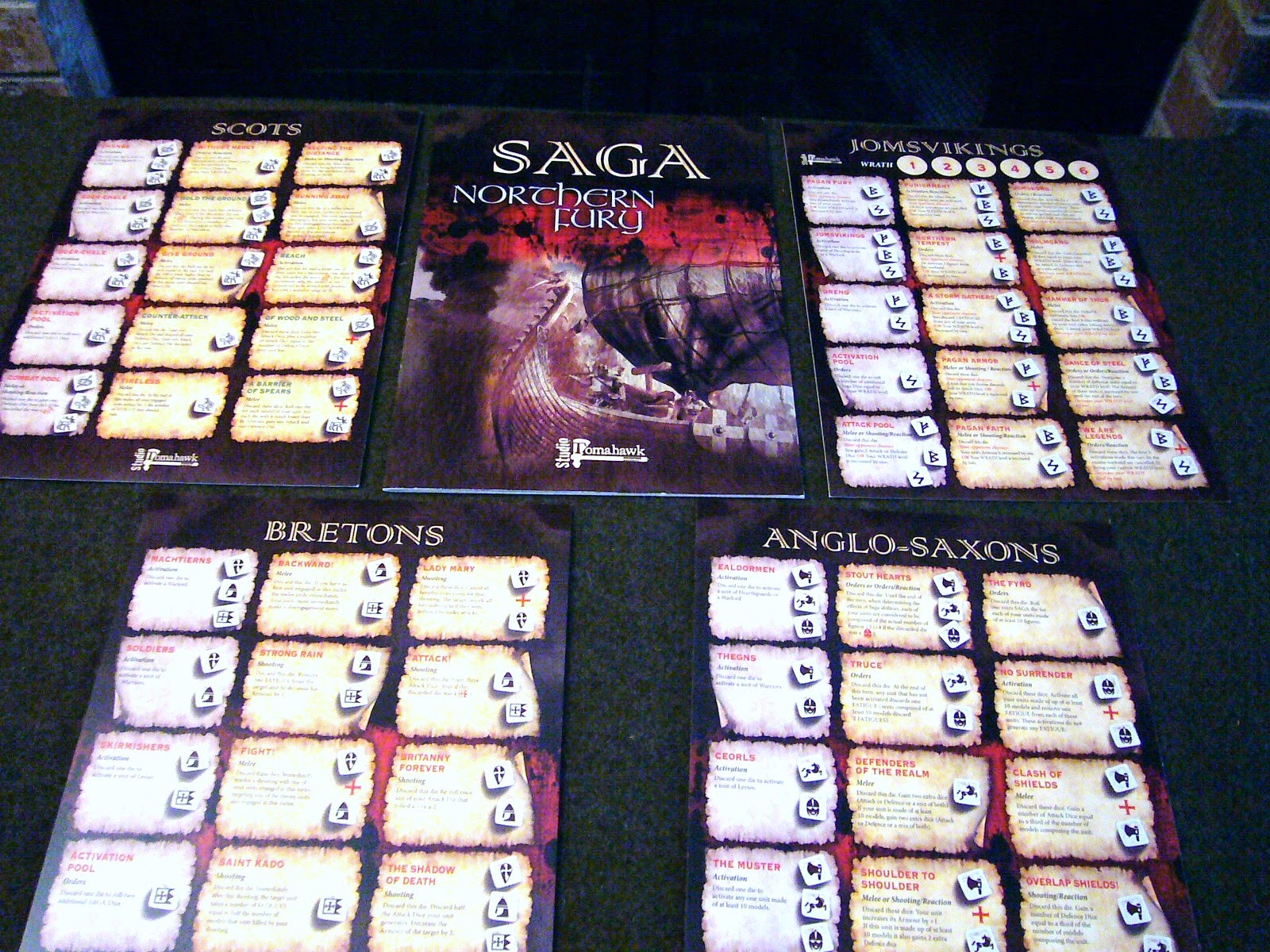 The Raven's Shadow came next and added the Irish, Franks, Norse Gaels and Strathclydes: 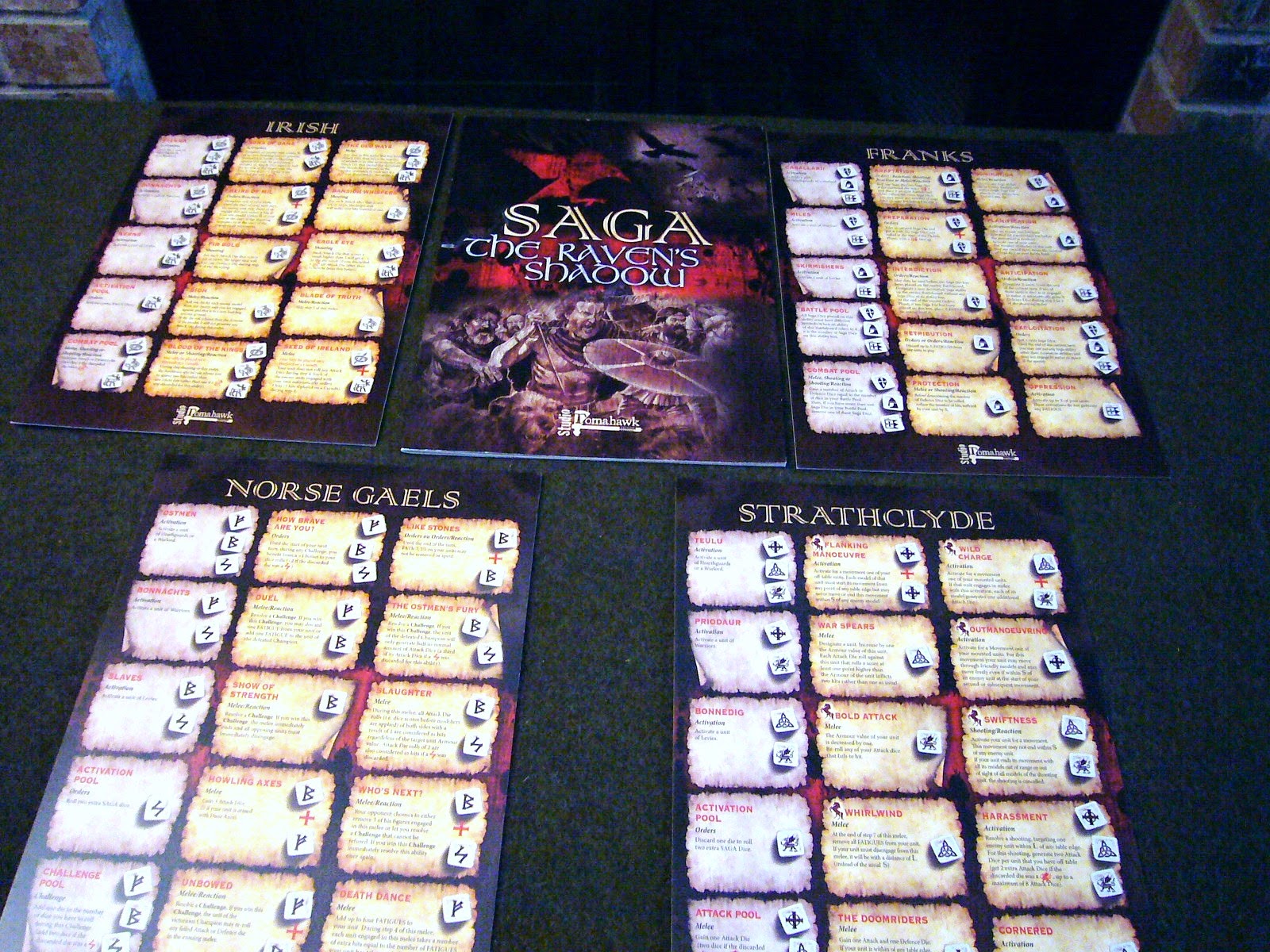 Additional Saga products currently are:  Varjazi and Basileus, along with a full line of miniatures from Gripping Beast.  Apparently, there's been a delay in their latest supplement, The Crescent & the Cross (crusading skirmishes).

Purchasing Dan's collection at this point in time proved to be quite fortuitous.  It's less than two weeks away from our annual Enfilade convention.

So I decided to throw caution to the winds in true Viking fashion, and signed up for the Saga Tournament hosted by Sven Lugar.

Due to my work schedule, I'll have enough time to read the core rulebook before plunging into battle.  Regardless of what fate awaits my tabletop warband, the outcome will be worth either a grand & glorious YouTube movie--complete with dramatic music--or more than likely, an ingloriously short blogpost with as few incriminating photos as possible...

In addition to the Gripping Beast website, additional Saga information can be plundered at:

Glad to see you went for it! I'm signed up for Sven's tourney also (Normans), so see you there.
Scott A.

Thanks Scott! I look forward to playing and seeing you there. I'm still trying to figure out what warband to muster.

This is great! I especially love how you store your miniatures in cookie tins.

Thanks Piper! Although I can't take credit for this. Dan included them in the deal. The magnetic strips he attached to the bottom of the figures helps keep them rooted into place.