A Visit to West Point Last week, my wife Janet, and I took a trip to New York State to visit my mom and a couple of siblings and siblings-in-law.  Lately though, in addition to visiting family, I've been wanting to see some of the historic sites my home state has to offer.  So on our return leg of our journey we managed to squeeze-in a 5-hour side trek to the US Military Academy (USMA) at West Point.

Since I'm retired military, we ended up entering through the back gate, who's name escapes me now, and drove downhill through the post.

The drive-through helped somewhat as we exited the front gate and headed to the Visitor Center.   This place has several displays, a gift shop and is the starting point for West Point Tours.  Bus tours run from 1-2 hours in duration.  But since we were able to enter the post on our own, we decided we'd do a self-guided tour.

Which brings me to the one sour note about the Visitors Center:  The two women at the front desk weren't friendly at all and in fact, downright rude when we asked for some details about the post.  That is, until we told them we were military.  Then their attitudes brightened in a flash as they handed us a post map.

We did some browsing in the gift shop, where one can find all sorts of items sporting the USMA Coat of Arms (COA)... 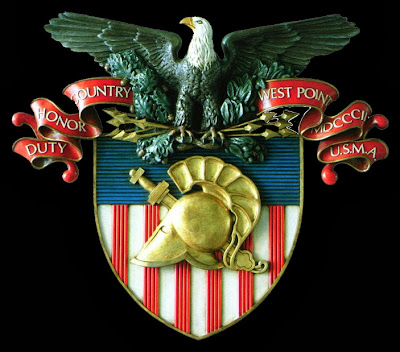 ...or the Go Army Sports Logo. 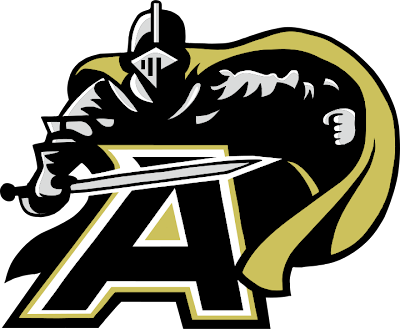 We spent about two hours in the museum, but only saw half of the exhibits.
(Note:  The above images are stock photos I hijacked from various sites, while the following pictures are samples of the ones Janet and I took). 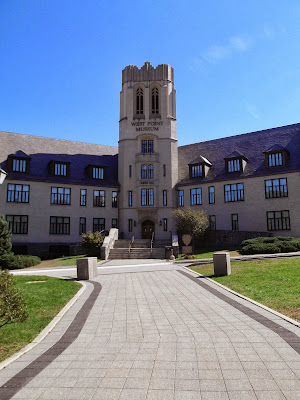 It was near lunch time, we were getting hungry and wanted to spend our remaining hours outside in the sunshine.

One of the first places I wanted to see was Fort Putnam, but we had trouble finding the pathway.  Also, from what we saw through the foliage, the site appeared to be undergoing a major renovation.  So we set ventured off to see the post's other points of interest.

It was at this moment we discovered the major flaw in our cunning self-guided tour plan:  Beyond the post exchange (PX--an on-post department store) and the commissary (the on-post grocery store), parking is nearly impossible to find unless you have a post parking pass.

A damned soul has a better chance of finding a cup of ice water in hell, than any of us tourist-types do in finding a spot to park a POV (privately owned vehicle).  Or at least one without running the risk of having our personal conveyance towed away.

The first visitors' parking spot we managed to find was at the Cadet Chapel. 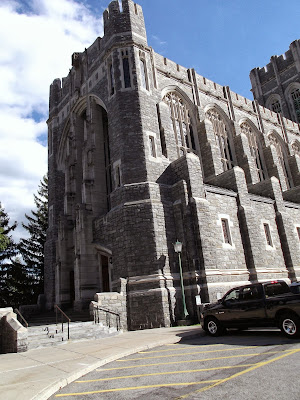 So we went inside for a look and spend a few moments in prayer... 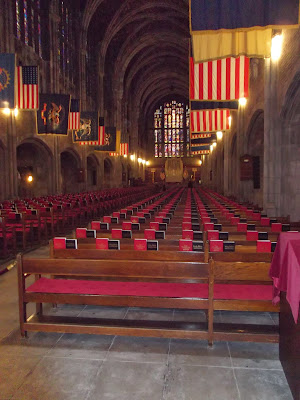 "Cathedral" would be a better word to describe this iconic house of worship. It reminded me of the medieval cathedrals I visited in Germany, France and Hungary.  But this isn't the only church on the post.  We drove by the two chapel-sized chapels during our intra-post road trip:  The Most Holy Trinity Catholic Chapel and the Jewish Chapel.
﻿
Despite the beautiful architecture and serene surroundings, West Point didn't start out as a place of higher learning for the US Army.  That didn't come about until 1802.  Prior to this, it was a series of fortifications overlooking the S-curve in the Hudson River. 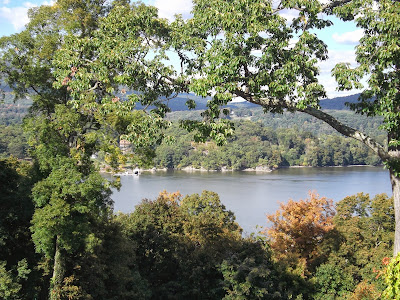 Thanks to the work of Tadeusz Kosciusko... 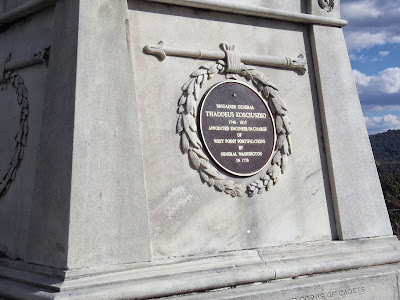 ...the Key to the Continent remained secure throughout the American Revolutionary War. 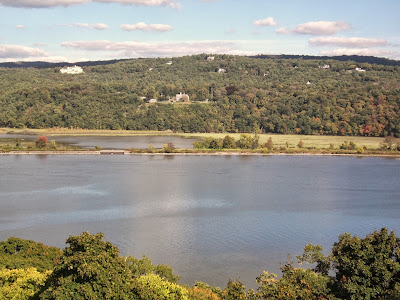 Although, thanks to Benedict Arnold we almost lost it.
After Benedict finagled an assignment as commander of West Point, he immediately set about hamstringing the defenses, to include neglecting the Hudson River Chain.
A portion of the orginal chain, thirteen links to be exact, can be seen here surrounding a monument: 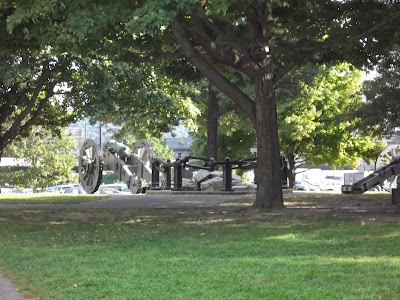 A plethora of documentation is available on Arnold's attempt to sell West Point's deed to General Henry Clinton.  However, going by the commemorative plaques, like this one here on Memorial Wall... 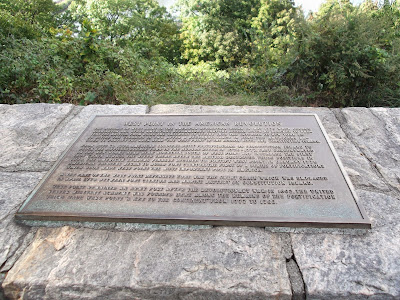 ...you'd never know Benedict Arnold even existed.
Interesting, but not surprising to me.
Several years ago, my mom visited the Saratoga Battlefield Park.  She mentioned the Boot Monument and how she was the only one in the tour group who knew the boot's owner was none other than our hero-turned-traitor.
Now it could be that Arnold's name and image are etched somewhere on the post.  Since our time was so short, we may have missed it.  But somehow I doubt it.
Arnold's apparent omission got me thinking the sessions of 1776, I played with my friend Tim.  We utilized the leader counters found in The GENERAL Magazine, Vol.25 No.4.  Predictably, there were two playing pieces representing Arnold:  One blue and one red.  At a certain point in the game, the American player would have to roll a die to determine if Arnold would exchange his Continental blue coat for a Redcoat red one.
Less than half-way through our game, Tim and I dubbed him Benedict "Ahnold":  Because, true to historic form, he was in the thickest of the fighting, occassionly winning a battle.  But more often than not, his command would be shot out from under him.  He'd show up a few turns later, be given another command and charge back into the fray, while the best any British could do against him was achieve some Pyrrhic victory.
Anyway, back to West Point of the present... 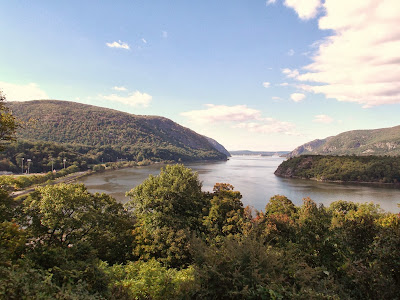 ...we ended our self-guided tour just in time to buy some souvenirs and have dinner with one of Janet's sisters and her boyfriend.  We didn't buy much, because neither of us were ever cadets, nor do we have any family members who were.  Our prize possessions are two coffee mugs with a USMA COA on one side and a beautiful picture of the Cadet Chapel under a full moon on the other.
I wish I could write more about the on-going university aspect of West Point.  But my only knowledge of enrollment, academics and cadet-life-in-general comes second-hand from friends and acquaintances who've attended.
Driving through the post during that late afternoon we saw scores of cadets exercising in their Black Knight PT gear.  From what I've heard, I half-expected to see cadets harried like Marine Corps recruits at Parris Island.  This may very well be at some point (most of the time?), but everything looked very pleasant and well, college-like.
So if any of you young readers who are interested in attending, or parents of said young readers; check out the USMA homepage linked above. Also speak to any graduates you may know for the real scoop my "drive thru" couldn't provide.
Good luck!
Posted by Ted Henkle at 7:30 PM

As a note, Navy establishments are usually referred to as "stations."
NAS for Naval Air Station, etc.
Dave

Thanks for the correction Vespican. But is that for all naval facilities, or just Naval Air Stations?

As one retired from Naval Aviation, I'm most familiar with NAS. I've seen NS or Naval Station as well. But I've also seen Naval Submarine Base, so...
And I think Marines use "Camp" for most of their establishments.
Dave
P. S. You can see more about my writing, at the PNWA members listing. Look for D. Andrew McChesney

Thanks again, I'll certainly look for your writings and maybe we'll run across each other at a PNWA function.