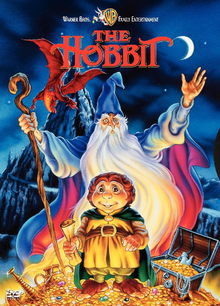 Near the end of his Introduction to The Annotated Hobbit, Douglas A. Anderson had this to say:
There have been many dramatizations of the book, both amateur and professional, since March 1953...These have been followed by various other reworkings, including a truly execrable 1977 television program...
(The Annotated Hobbit, page 23)
The execrable television program Mr. Anderson referred to was, The Hobbit produced by the animation duet of Arthur Rankin Jr. and Jules Bass, most famous for their Christmas Cartoons.
Now the '70s were known for some truly execrable things--like fashion and interior design--but I don't think this Rankin & Bass production falls into that category.
True, its most likely doomed to be blown away by the upcoming Peter Jackson version, but hey, back then this was cutting edge animation!
As my sister Rox of Spazhouse and I, in our best Gollum impersonations, say about this film:
We likes it.
Yes, the animation is dated and the movie has its flaws (scroll down to the "Goofs" Section on the IMDb page).
Personally, I didn't care for how the elves are portrayed...

...who look marginally better than the goblins. 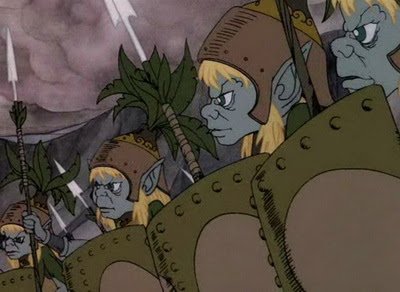 My vision of elves "just happens" to coincide with Peter Jackson's, such as Legolas... 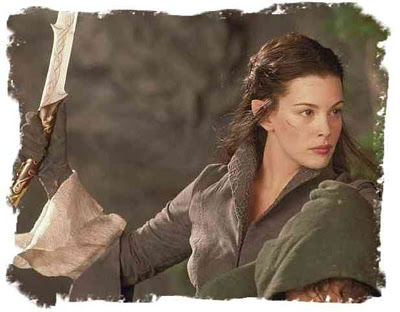 The movie also left out Beorn and the Arkenstone, along with glossing over its climax:  The Battle of the Five Armies.
My girlfriend and I watched it on my copy of the DVD a couple of weeks ago and I noticed that some of the sound effects are missing.  (Yes, I purchased it legitimately).
However, despite these shortcomings, there are a few key scenes that elevate this movie from "execrable."
First, having re-read The Hobbit, I was surprised that the songs--some of them quite silly-sounding--were taken right from the book. So were the poems.
The movie is comprised of an all-star cast of film and voice actors that did an excellent job of dramatizing the dialogue, once again, lifted right out of the book.
For instance,  Richard Boone, as the dragon Smaug, will be a tough act to follow, even for Peter Jackson's ensemble.  In fact, I still get goosebumps when the dragon brags about his might and prowess.
This isn't the only scene that tingles my spine every time I watch it.
I can still hear Gollum screaming:  "...WE HATES IT!  HATES IT! FOR--EVER!"
When Bard the Bowman grabs his trusty Black Arrow and lets fly, his soliloquy is one of the coolest moments in fantasy motion pictures ever.
And yes, I get choked up just happen to get something lodged in my eyes, when Thorin Oakenshield says his final words to Bilbo.
Does this mean I'd give the movie a 5-star rating?
No.  I give it a solid 3-stars.
The ratings on Amazon.com are all over the map, (of Middle Earth or Real Earth, take your pick); but average out to a respectable 3.7 stars.
Even with the impending release of Peter Jackson's movie, it's worth buying--a good copy--of the DVD.  I think it will be especially helpful for parents with pre-adolescent children, who may want to introduce them to story.  This way the little ones won't be exposed to the blood-letting that will hopefully surely be a part of Peter Jackson's movie.
Posted by Ted Henkle at 1:00 AM

I remember watching this when I was a kid and I loved it, too. I agree with you about the elves-- I always thought of them as being rather ethereal and a bit more swoon-worthy :)

When I saw "Return of the King" in the theaters, I swear I could hear every teenage girl (and maybe some not-so teenage girls) "swoon" when Legolas slid off the Oliphant during the Battle of Pelenor Fields. :)