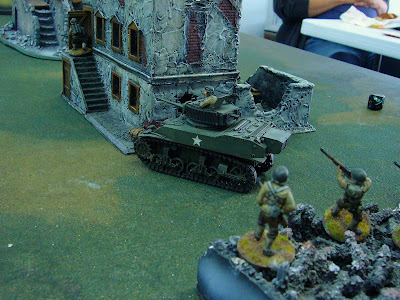 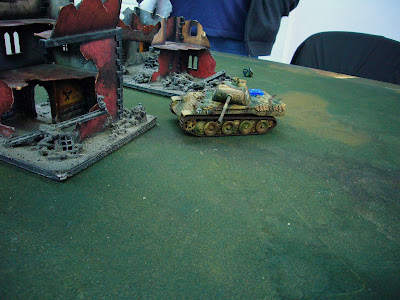 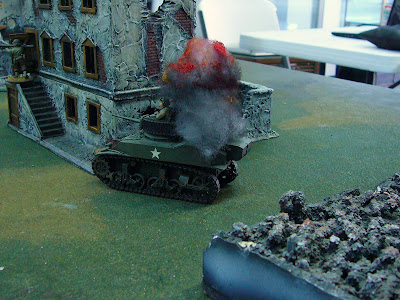 The above gaming action took place on 1 October at the Game Matrix in Tacoma, WA.  The planets must have been in alignment this particular weekend.  Not only did I have an entire weekend off, but I didn't have any appointments, errands to run or chores ("domestic drudgery") to do.  This was the first day, in what turned out to be my one-man gaming convention.
Day 1, Friday
The uneven tank battle pictured above was part of an Operation Cobra scenario developed by my friend Dean, using the rules Disposable Heroes/Coffins for Seven Brothers.  Dean is also the author of the popular WAB Corner blog.  You can scroll down to Operation Cobra, for a more detailed narrative of the game:
http://wabcorner.blogspot.com/search/label/WW2
In this scenario, elements of the US 4th Armored Division were ordered to seize a French town to facilitate a breakout.  Three infantry squads were supported by a Sherman tank, a Stuart tank, one half track and a jeep.  The Germans, naturally were ordered to hold the town.  Three squads of Fallschirmjaegers were supported by a Pzkw-IV, a PSW-232 armored car and a Panther tank.
The game ended in somewhat of a draw with the German and American squads holding positions in the center of town.  The PSW-232 and Stuart were knocked out, while the Sherman played hide & seek with the Pzkw-IV and Panther.
Day 2, Saturday:
A long time ago, in a galaxy far, far away...etc., so on & so forth...

Several of us from the Puyallup Wargamers got together for a session of the Star Wars Role Playing Game (RPG).  Seth, our Game Master (GM), just started a Rebellion Era campaign.  (That is, it takes place in and around the time of the original 3 Star Wars Movies).  This was my first time attending Seth's new campaign and I was eager to introduce my character:  Maeriland Smith--Reference Librarian for the Rebellion!


Introducing our four heroes and their mission, (click on the picture once or twice for better readability): 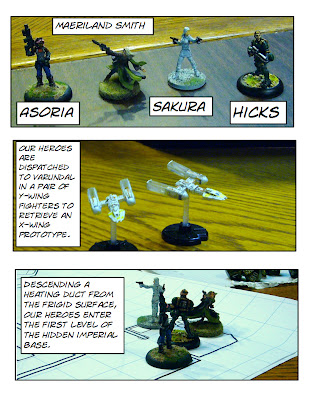 The rebel operatives finally make it to the flight deck level of the Imperial base. 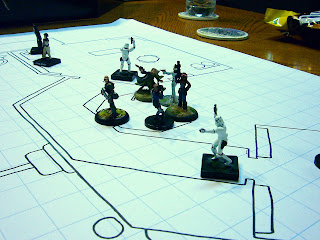 Recapturing the stolen X-Wing and getting the test pilot back into the cockpit. 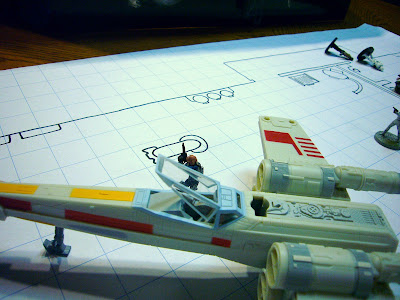 Our heroes retrace their steps to rescue a Wookie captive.  With his last breath the Wookie gives the group an artifact containing Wookie hieroglyphics and asks that it be given to his brother Liackuk.  The rebels then set the base's reactor to overload, herd Imperial prisoners on board a shuttle and then zoom off into space before the reactor melts down.
But questions remain.  Who is Liackuk?  Where is he?  And what is so important about this hunk of plastic with Wookie scribbles on it?
To find out, stay tuned.... 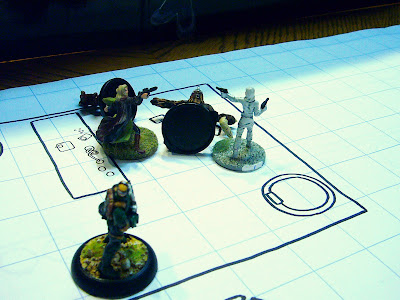 Day 3, Sunday:
The Axis Powers have been vanquished and two superpowers arise from the rubble of the Second World War:  The US (or "Capitalist Pigs"--played by me!) and the USSR (or the "Godless Commies"--played my friend Joe).  The two of us set out change the course of the Cold War in GMT's Twilight Struggle.
This political/military game recreates all the decisive and anxious moments that flared-up during these years.  (And some of us remember them very well!).  Each player seeks to influence, control and ultimately dominate strategic regions around the world--and even space.  Each turn in this Card Driven Game (CDG) represents 3-5 years, with card-play being used to determine if and when historical events occur.
We started off at 1945, with the Capitalist Pigs and Godless Commies eyeball-to-eyeball in Europe.
(Note our original set up turned out to be incorrect.  The counters should be flipped to show "influence," not "control," over these countries.  We corrected this later in the game). 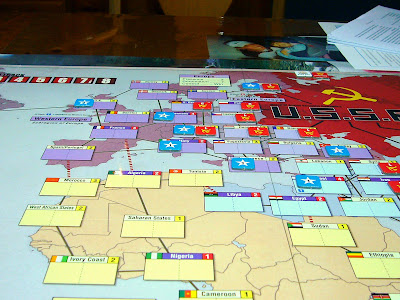 After several turns we started to get the feel of the game.  The Capitalist Pigs were trailing the Godless Commies for world domination.  So I decided to sweep through Southeast Asia to grab some much needed victory points. 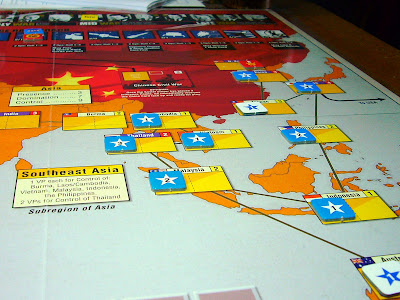 Unfortunately, it was the proverbial "too little, too late." I failed to realize how critical Europe was perceived to be during the Cold War.  While I was building my Southeast Asian Alliance, the shadowy minions of the Godless Commies undermined the governments of eight European countries; thus dominating the continent and automatically winning the Twilight Struggle. 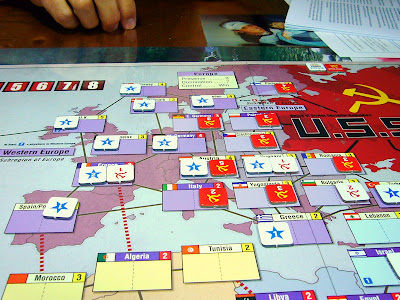 Well, despite losing the Cold War to the Godless Commies, I enjoyed gaming with all my friends on this early October weekend.  I just hope I don't have to wait for another planetary alignment before I can do this again.
I intend to produce more detailed After Action Reviews (AARs) on all these games, either in the form of YouTube videos or graphic novels--
Posted by Ted Henkle at 8:00 PM

Good stuff, keep it up.

Looks like you finally got a break to game; and you used the time very well!

I like the looks of the Cold War board game. Appears it can accommodate several players per side? Hope you (or you buddy) can run it at Enfilade.

Thanks guys! I really enjoyed my time with everyone.

Unfortunately, Twilight Struggle is strictly a 2-player game. It would certainly be cool to do a multi-player one!