Redshift Chronicles: The Origins of MARVIN and Other Odds & Ends 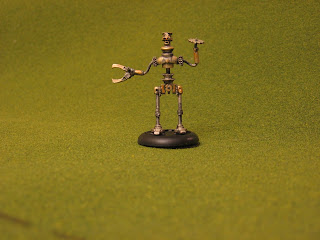 When posting pictures and game reports it is important to list what company manufactures the figures used, or about to be used in the game.  This way, other interested players know where to find the same figures to use in their games.

At the time I posted News Brief #5, I didn't have any information on MARVIN's origin.  The droid will be a new character (PC) and the player informed earlier today the figure was made by Reaper:

I've been blogging for just over two years now, but I must admit, I'm still getting use to operating here in cyberspace.  One of the comments made on a gaming website was my use of individual postings versus creating a thread.  I'm still trying to finesse that one, but what I did notice was how long the "SW Redshift Chronicles" thread on this blog was getting.

For anyone who's read my Redshift posts since the beginning, this may not be a problem, but for someone just starting out, reading through my posts--in reverse order--can be a pain.  To help alleviate this, I've added a few more Labels to each of the entries in order to break it up into more readable chunks.

I'll keep the Star Wars RPG Adventures and SW Redshift Campaign labels in order to provide an on-going narrative.  But for those not wishing to scroll through the entire cyber-tome, I've broken the campaign into the following categories:

In the future, I'll add a SW Redshift Campaign AARs category for any major confrontations that may occur.

I hope this reorganization is less annoying for the readers of this campaign.
Posted by Ted Henkle at 5:00 AM