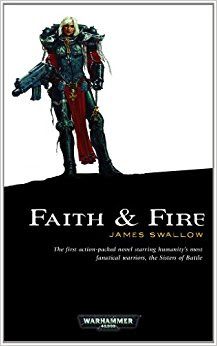 One of the more popular factions among Warhammer 40K players, but sporadically supported by Games Workshop, are the Adepta Sororitas (a.k.a. Sisters of Battle), the actual military arm of the Ecclesiarchy.

I stumbled across a copy of Faith and Fire at Half Price Books.

Fire certainly comes into play throughout the novel.  The Sisters of Battle believe that the only good witch/mutant/heretic/traitor is one who's not only dead, but burnt to a crisp.  Meanwhile, their psyker enemies often retaliate with "witch fire."  So in just about every combat scene there's flames, screaming, smoke and burnt-flesh odors.

The story itself revolves around Miriya, a Celestian, and Hospitaller Verity, in their attempt to recapture renegade psyker Torris Vaun.  During their investigation, and the battles they're swept-up in, they uncover a plot by deluded Deacon Viktor LaHayn to restart an Artifact Of Death hoping to revive the comatose God-Emperor of Mankind.

Their Odd Couple partnership resembles the Cop And Scientist team-ups from Holmes & Watson to Scully & Mulder.

I found Faith & Fire to be a predictable, but entertaining story and give it a 3-star rating.  The finale has an element of Deus Ex Machina to it.  However, this can be justified, since the story revolves around the characters' religious zealotry for the God-Emperor.

Readers generally liked Faith & Fire, which has a 3.5-star rating on both Amazon.com and Goodreads.  Warhammer 40K fans either loved it, or hated it.  The fans who disliked the book thought the characters were wooden, flat, unremarkable and even unlikable, along with sounding more like men, than women.

I didn't pay attention to these valid observations, because the characters are members of Imperium's Church Militant.  Their lives revolve around prayers, singing hymns, and incinerating the enemies of the God-Emperor.  This doesn't leave much room for deep character development, or more feminine pursuits, beyond religious fervor.

--The heroes demonstrate insight and initiative.
--Which in turn, causes them to run-afoul of their dogmatic superiors.
--The agency the heroes are members of have a hidden agenda.
--Which in turn, runs afoul of one or more other agencies operating on their own agendas.
--There's a conspiracy afoot to take over a planet/star system/quadrant/the entire Imperium.

Despite these standard tropes, I still liked Faith & Fire enough to start reading the sequel,  Hammer & Anvil, right off the bat.
Posted by Ted Henkle at 7:30 AM