I'm taking a small break from my long-form webcomic Breakout from Bongolaan.  This short "intermission comic" was inspired by a story one of my friends told me.

A detailed account of the comic's origin is explained below in the Author's Notes. 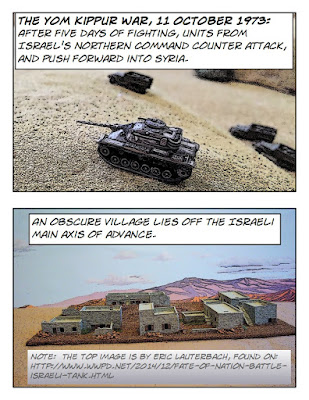 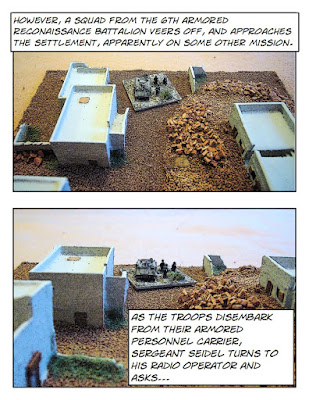 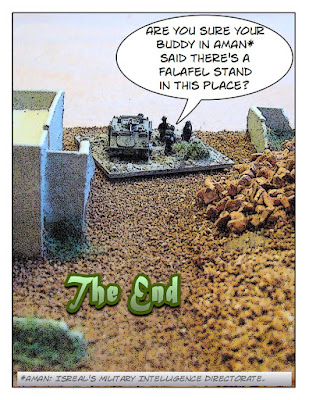 During my anonymous friend's tour in Afghanistan, he told me how much he and his soldiers loved Afghan Bread.  So much so, that one day when his squad was suppose to go out on patrol, he asked his interpreter-guide to take them to a village where they could buy some.

This isn't hard to imagine, especially after being on a steady diet of MREs.  Nor is "going off mission" in a quest for Afghan Bread an isolated incident.  Throughout history soldiers have shown a tendency of venturing out, not to engage the enemy, but to search for food, booze, war souvenirs, etc.

Since I only have four US Marine figures suitable for Iraq or Afghanistan theater of operations, I decided to set this story elsewhere.  I have plenty of micro-scale Arab-Israeli War figures, and I recently posted about my new village model, Khaliat Min Bus.  So I blended my friend's story with my miniatures pictures to conjure up this timeless tale.  I also substituted Afghan Bread with Falafel.

All but one of the pictures used in this comic are mine.  I needed a picture of Israeli micro-armor to evoke an image of a sweeping advance.  Thanks to Wargames: Soldiers & Strategy, I found a suitable one for Page One's top picture on Eric Lauterbach's "Fate of the Nation" After-Action Review (AAR).

To give Going Off Mission some semblance of historical accuracy, I scrolled through Wikipedia's entry on the Yom Kippur War, and rummaged through the playing pieces of my game Golan: The Last Syrian Offensive.  I chose the 6th Armored Reconnaissance Battalion counter as the story's military organization, because I assumed soldiers from a recon unit would have the best opportunity to gallivanting off on their own agenda.  I also figured guys in intelligence organizations, like Israel's Military Intelligence Directorate ("Aman"), would also know where to find the best "commodities" for soldiers to "liberate."

Despite such assumptions on my part, I hope you enjoy the story, which can also be found on the Studio's Main Page, dated 19 January 2016.