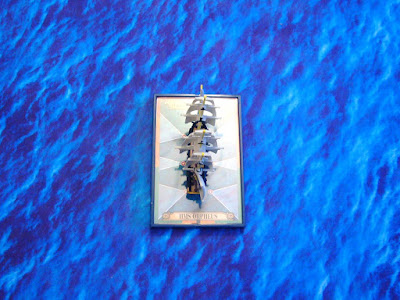 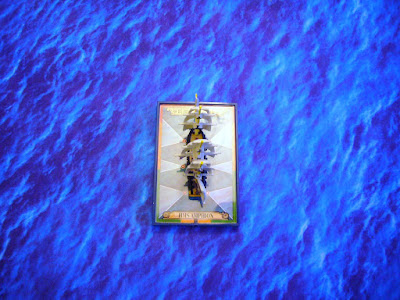 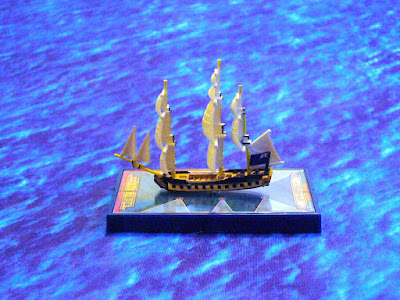 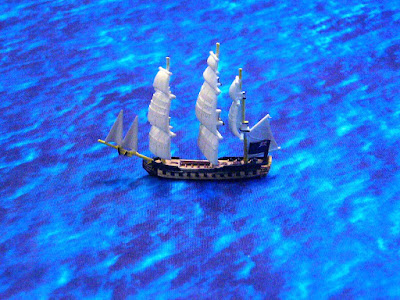 I love how the ship looks, especially when place on the Ocean F.A.T. Mat that I bought several months ago.  I look forward to playing Sails of Glory and using any waterline versions of ships in my after action reviews.
A few words of caution are in order when making "waterline" versions of these ships:
First and foremost, BE CAREFUL when handling the ships.  The hard plastic makes them rather fragile.  When snipping off the tab of HMS Orpheus, I broke off part of the bowsprit.  Fortunately, it broke in a spot that was easy for me to jury rig it back together with a dab of super glue.
Second, the ships are very light, and without the base they easily tip over.  This is okay if you're thinking "cinematically" like I do and are taking staged photos.  But if you plan on using waterline versions in a wargame you may want to find some thin miniatures bases, or some other thin strips of metal, and superglue them to the undersides of each ship.  If the metal strips are wider than the ship's hull, it may help to paint them in appropriate ocean colors.
Finally, the undersides of a ship's hull may not be completely flat.  In this case, sanding the underside or scraping it with an exacto knife may be necessary to keep a ship from listing.
Posted by Ted Henkle at 7:30 AM