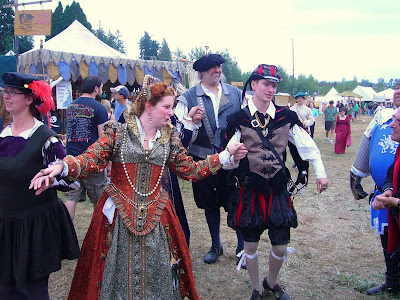 (Image: Her Majesty, Queen Elizabeth I of England and her courtiers greet her subjects)
Last weekend, Janet and I revisited Ye Olde Kelley Farm for the annual Washington Midsummer Renaissance Faire.
Unlike the previous years in the sweltering heat, the weather was a mild 70-ish degrees with some overcast.  So the heat didn't stifle anyone's appetite at the bustling food court. 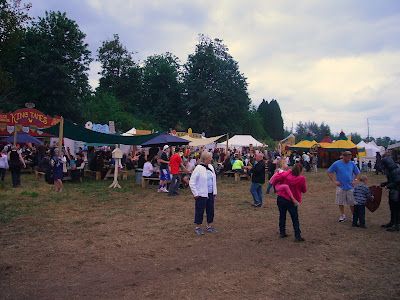 But no matter what the weather, there was always a place where adult beverages were served. 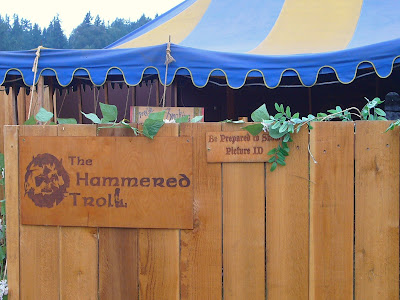 Here's the way leading to the tournament field. 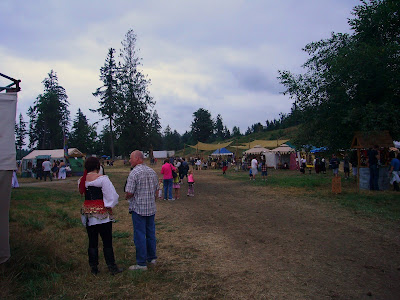 The perennial camp of the Brotherhood of Oceanic mercenaries.  In other words--pirates. 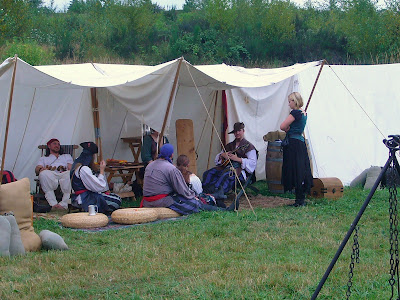 This jail was a new feature, or at least I don't remember it in years past. 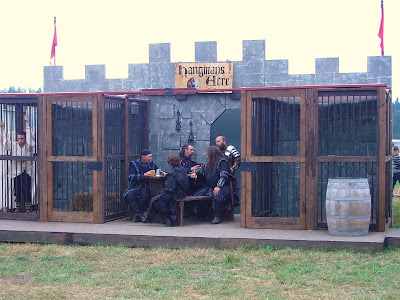 From what I gathered, one could post a bounty on an individual and the guardsmen would escort them to Ye Olde Lock-Up. 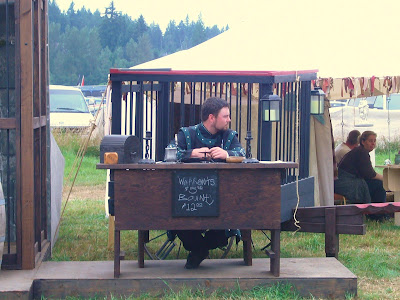 Looks like the Dread Pirate Roberts should have stayed at the camp. 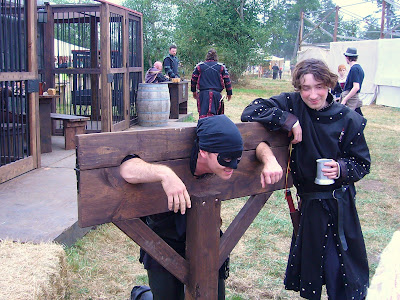 Have fun in the Pit of Despair!
There seemed to be more attendee cosplayers (costume players) this year, either because this was the opening weekend of the faire, or because of the cooler weather, or both.  In any case, one would need a steady sea breeze to stay cool and dry in outfits like the ones sported by these scurvy dogs. 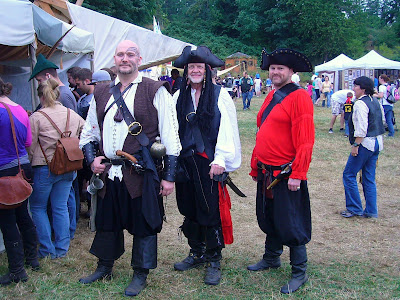 I'm not the piratin' type, but I can see the appeal of dressing like one.  It's like "casual Friday-Renaissance style."  That is, you don't have to worry too much about historical authenticity since pirates dressed and armed themselves with whatever they managed to "acquire."
Then again, Renaissance Faires in general, are noted more for their flights-of-fancy, than historical accuracy. 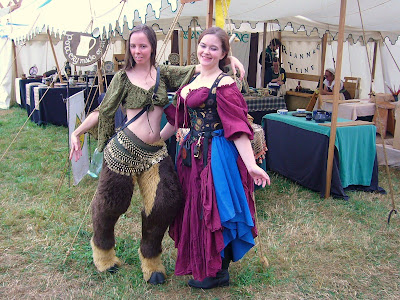 But historical or otherwise, cosplayers displayed a lot of creative talent, like... 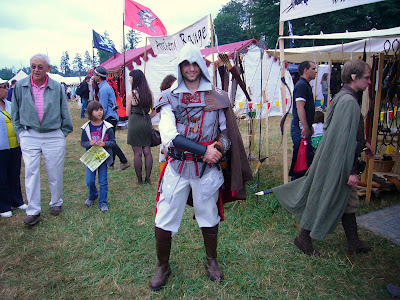 ..."Ezio" here, from Assassin's Creed.
Last year, Janet and I sought shade under the medieval game pavilion to escape the heat.  We spent a pleasant hour, or so, playing chess. 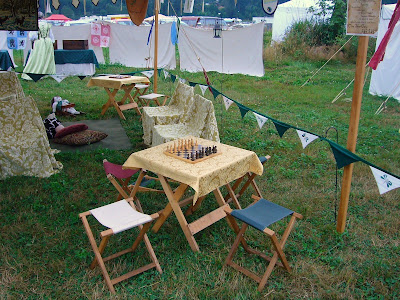 We didn't have a rematch this year because we were more interested in checking-out the vendors' wares.
But one didn't have to be a mere spectator, shopper or casual gamer while attending this, or any other "RenFair."  There were more active pursuits, like foam weapon bouts. 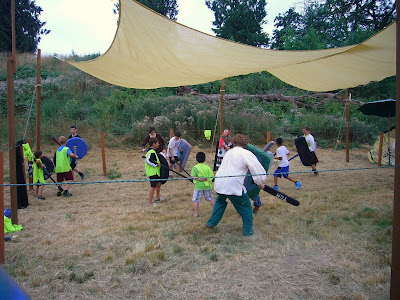 This particular one, was sponsored by The Game Matrix... 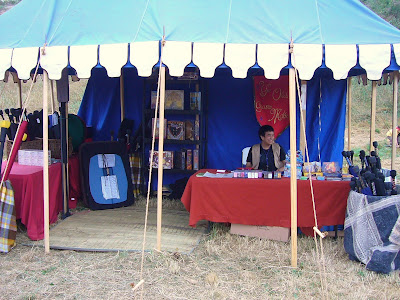 ...which also had some Renaissance-themed boardgames available for sale.
Meanwhile, back in the fighting pit, "little Eowyn" stood her ground against all comers. 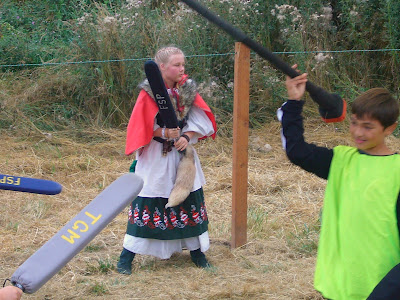 While the jousts were the faire's main draw, along with sword fighting demos; musical performers were popular crowd pleasers between the organized brawls.
Here, another trio; possibly from The Seadogs, entertained attendees with their sea shanties,  like Don't Forget Your Old Shipmate, which was featured in a scene in Master and Commander: The Far Side of the World. 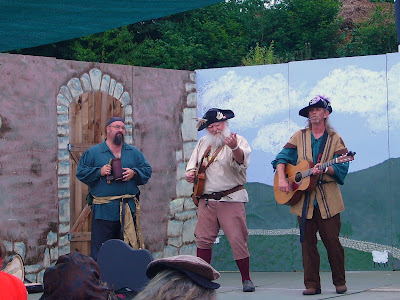 There were several outdoor theaters within the fairgrounds, most of them without shade.  It seemed these venues drew larger crowds this year.  Once again, I'm assuming the cooler weather made it more tolerable for people to sit through the acts, rather than seek shelter.
This duet, Marty and Cheryl Johnson, or "MarCher," gave a pleasant performance while Janet and I snacked on kettle corn.  My favorites from their repertoire were:  Suil a Ruin, (aka Johnny Has Gone for a Soldier) and Barbara Allen. 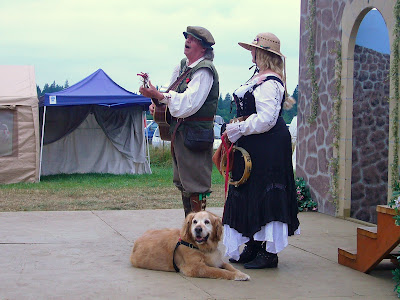 Now after spending several minutes on YouTube exhaustive research, my favorite media version still comes from the movie A Christmas Carol, where I first heard the ballad.
Music and martial prowess aside, the most unique venue was Melissa Arleth's Cirque de Sewer. 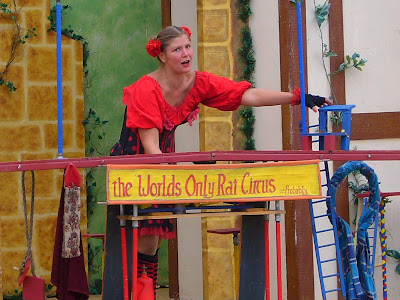 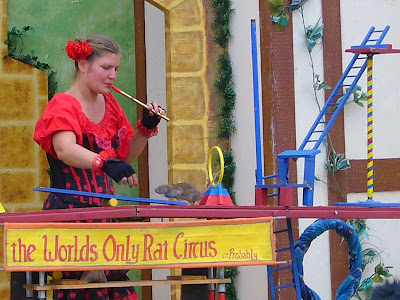 The faire continues for the next two weekends.  A List of Performers and Schedule of Events are still available so you can plan your outing accordingly.
A friend on Facebook jokingly asked if I bought a kilt during the Highland Games a couple weekends ago.
I didn't, primarily because my Scottish lineage is rather murky and I don't want to buy any-ol kilt from any-ol clan that I'm not a member of.
But this excursion was different.  Since we didn't have to deal with the oppressive heat, Janet was enthusiastic about shopping for what she called a fun costume.  She ended up buying a green overdress and cotton chemise ensemble, similar to this... 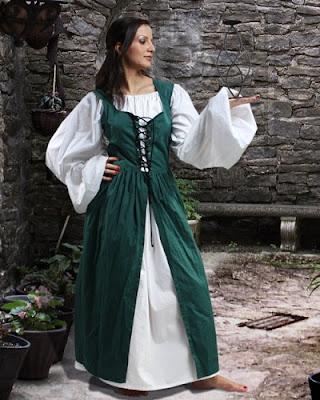 ...but without the uber-poofy sleeves.
I love history, but as far as re-enacting it goes, my interest is minimal at best.  I did a short stint of Napoleonic War re-enacting with some friends, while stationed in Germany.  It was fun, but not enough to interest me in doing it "full time," as opposed to being a "part-time" cosplayer in a climate-controlled environment, like at comic book conventions.
But Janet's enthusiasm was infectious and I wanted to be part of her fun.  So I bought a pair of cotton breeches... 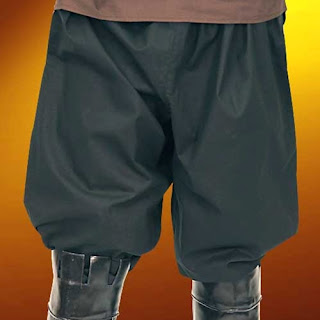 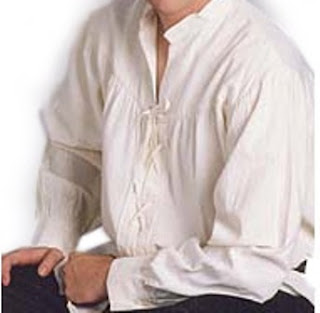 I also got a good deal for a replica pistol like this...

...along with accompanying baldric. 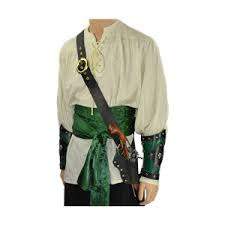 Even though I'm retired from active-duty military, I still fantasize about being some "Defender of the Realm."  But the idea of clanking around in full-plate armor lugging a Zweihander on a hot summer day for fun, doesn't sound like my idea of--well--fun.
So I'm going with something that's light to wear and easy to maneuver through crowds.  I'm not sure yet what I'll dress-up as, so I'll do some research to see what strikes my fancy.  Since the shirt and breeches are so generic, I have a wide range of options.
By this time next year, I may be attending the faire in costume--provided it's a nice, cool and cloudy day.
Posted by Ted Henkle at 7:30 AM

This one was well done and looks to be a cut above the norm.

Thank you Anne! I appreciate your compliments.

Looks like a great gig; haven't been to the farm 'cept for the first year they held it there - kind of dusty. I liked it at the old Gig Harbor side (before the toll bridge to get back). Can't convince my wife to go back. Maybe when I get a Witch Hunters costume together I may make a showing. Best, Dean

This is the first time I've attended the faire for two consecutive years. I'm starting to recognize some of the vendors.
I only went once when it was held in Gig Harbor. What I most remember was the long line of traffic to get into the fairgrounds.
Good luck with your "Solomon Dean" outfit! :)