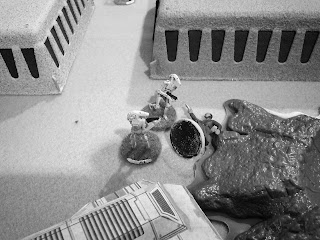 Stardate: Wonday, 009-130 ABY/Fringe Info Network (FIN)--Tarsus Bureau
Subsector: Shannekam
Ambassador Heraud Murdered!
Ambassador Fitzroy Heraud was killed within the first hours of the Galactic New Year, while on the planet Bongolaan.  The Tarsan ambassador and his aid, Callithea Lockridge, were on a diplomatic mission to negotiate a trade deal with the recently elected, President-for-Life, Zeveg Bharzi.  While election fraud was a likely factor in elevating Bharzi to high office, his administration lasted less than a week.

Bongolaan's Vice President, Bunda Akhtar, staged a New Year's Eve coup, using Clone War-Era battle droids, reportedly supplied by the Fel Empire.  Droid squads, supported by HKDs (Hunter-Killer Dropships), seized critical facilities and interdicted ground and airborne traffic until the planet was secured.  Ambassador Heraud was traveling in a motorcade through the Bongolaanian Capital of Ratankiri, with President Bharzi and Twi' lek holovid celebrity Shiri Blen, when Akhtar's forces struck.  The VIP convoy was strafed by at least one  flight of HKDs, in one of several simultaneous attacks launched prior to Galactic Midnight.
Ms Lockridge was in the Presidential Palace when the initial attack took place.  She joined three relief agency workers and helped defend civilians within the palace against the droid onslaught.   The ad-hoc team then made their way through Ratankiri in an attempt to locate the Tarsan ambassador.  En route, they drove off a pack of looters assaulting Shiri Blen and her Rodian agent, Geelo.
Shiri and Geelo led the group back to the ravaged motorcade, where they found Ambassador Heraud still alive, but pinned under an overturned speeder truck and suffering from serious injuries.  Unfortunately, when they tried removing the ambassador from the wreckage, they were attacked by a squad of battle droids.  Geelo was killed in the firefight, while the light-saber wielding human was struck by blaster fire and left for dead.
The leading image was transmitted to the Tarsan Commission of Diplomatic Affairs (CODA), by an anonymous source, claiming to be a member of the Bongolaanian Armed Resistance Cadre (BARC).  The hazy picture shows the wounded Ambassador Heraud exchanging fire with two battle droids approaching behind him, near the rim of a blast crater. 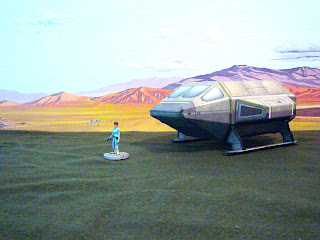 Pictured above:  Callithea ("Calli") Lockridge disembarks from a Rockhopper-Class shuttle at a remote Bantha ranch on Tarsus.
The news of Ambassador Heraud's death wasn't released until this morning.  Yesterday, the survivors of the Bongolaanian Coup were interviewed by the Tarsan Board of Commissioners, while members of the Heraud family were notified of their loss.  According to Ms Lockride's emotional testimony, Ambassador Heraud ordered her and her companions to leave him, because he was too injured to move and the entire party was on the verge of being overrun.
In addition to publicizing the tragic news about their ambassador, the Board of Directors transmitted the following demands to the government of Bunda Akhtar via subspace radio:
--immediately return the ambassador's remains
--issue a formal apology for his death, and
--dismantle and scrap the battle droid squad responsible for killing the ambassador.
Since Tarsus has no direct holovid connection, it will take four days for the subspace signal to reach Bongolaan.  In the meantime, preparations are being made for a state memorial service in honor of the late Ambassador Heraud.
Posted by Ted Henkle at 7:30 AM

If that model is a paper one, it's well done. Better than I could manage. Dean

Aw, thanks Dean! It's from Ebbles Miniatures and they specialize in downloadable paper miniatures. I thought the name "utility shuttle" sounded too bland, so I'm calling it a "Rockhopper" instead.