Product Review: Freedom in the Galaxy 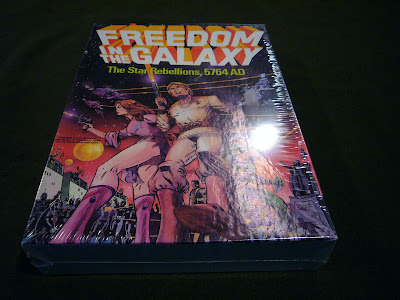 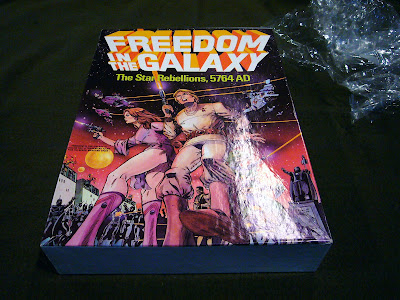 Once I tore off the 34 year-old plastic, I opened the box... 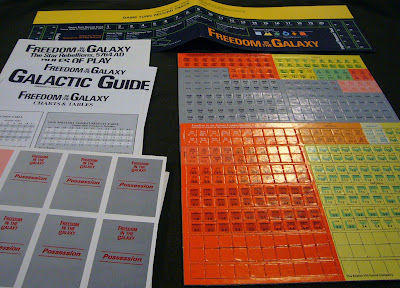 By today's standards, the counters are rather bland and generic, but they're functional.  The game gets a decent 6.61 out of 10 rating on Boardgame Geek.  The main complaints about Freedom in the Galaxy are:

--It's unbalanced and favors the Evil Empire.
--The convoluted rules often require the creation of in-house rules and variants.
--And finally, the game itself takes a lo-o-o-ng time to play.  20 hours from start to finish is considered an optimistic estimate. 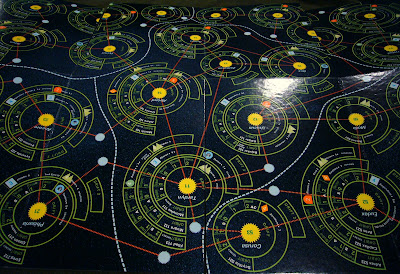 Despite the above complaints, many gamers still love Freedom in the Galaxy, which published in 1979, is considered an enjoyable "...thinly veiled Star Wars game..."  (Commenter #17, giving it an 8.5).

Even if my group never plays FitG as it was meant to be, so far it's serving as a great campaign vehicle for our not-so thinly veiled Star Wars game.
Posted by Ted Henkle at 5:25 AM No comments: 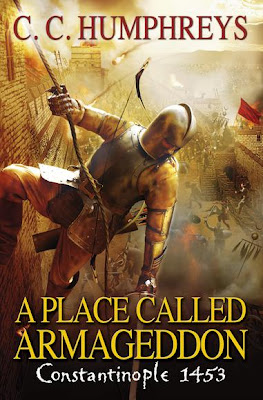 Byzantium.  The very name conjures up images of Orthodox churches, mosaics--and multiple layers of convoluted schemes.
Less than seventy-five years after the fall of Rome, The Eastern Empire had regained nearly all the territory lost in the west.  However, by the middle of the 15th Century, the Byzantine Empire barely controlled the landmass beyond the walls of it's capital, Constantinople.
On 21 May 1453, this thousand-year empire fell.
A Place Called Armageddon by C.C. ("Chris") Humphreys, is a sweeping saga of Constantinople's lasts days as a Christian empire.  Although not a sequel, characters introduced in Vlad, The Last Confession, "reprise their roles," so to speak, and find themselves on one side, or the other of the siege lines--and sometimes both.
The story focuses on Gregoras Lascaris, his reluctant return from disgrace and his relationship with his family.  A relationship that remain strained, even as the Turkish host closes-in. Chris deftly weaves fiction with historical fact that binds towering figures like Constantine XI, Memhet II and John Grant, to common soldiers, sailors, pirates, mercenaries, a sorceress--and even a cat--as the siege drags on.
Chris brings his experience as an actor and fight choreographer to the written page.  The reader is plunged into the midst of desperate assaults fought around--and even under--key positions of Constantinople's defenses, while even the "slow moments" are taught with emotion.  Reading A Place Called Armageddon, is like watching the movie Titanic, (or better yet: A Night to Remember ).  Despite knowing the historical outcome, one is compelled to read-on, to see what fate befalls the Lascaris Family and nearly 50 other minor characters, once the Theodosian Walls are breached.
The story doesn't end happily for everyone, but it Chris ties-off every loose end, which makes A Place Called Armageddon very satisfying to read.  A definite 5-star story to add to your historical fiction collection!
A Place Called Armageddon was released last year in the UK and Canada.  It will be available in the US sometime in the fall of this year (2012).
Posted by Ted Henkle at 11:05 PM No comments: 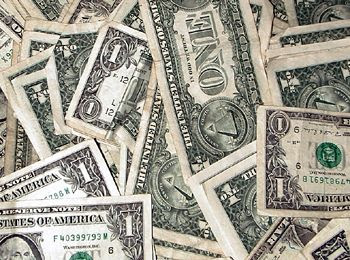 Writers are always on the lookout to earn money for their work.  With this in mind, I finally signed up for Google's Ad Sense this evening.  After Google reviews my blog, there will be advertisements placed in the side bar.  I could have opted to have ads attached to each post, in addition to the sidebar notes, but I didn't to bombard my readers with "This post brought to you by..."
Posted by Ted Henkle at 10:10 PM No comments: 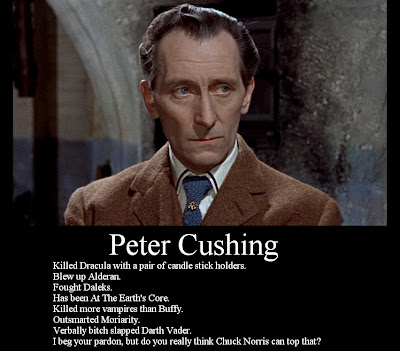 My friend, Adrian, came across this video on YouTube of Peter Cushing with his miniature collection. In addition to the link, Adrian also tossed this comment in his e-mail:  "You didn't know that Grand Moff Tarkin was a Napoleonic wargamer did you?"
The story Cushing's hobby has circulated throughout cyberspace for some time.  So this posting isn't so much as breaking news, as it is a tribute to the late, distinguished actor.
Posted by Ted Henkle at 3:20 AM 2 comments: 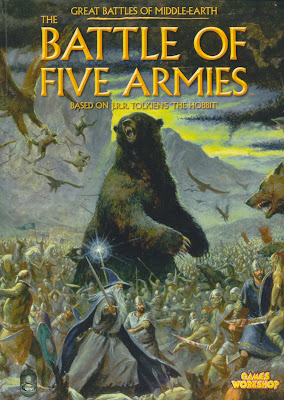 I picked up this set of rules for about $10 and then paid an addtion $2+change for shipping and handling. 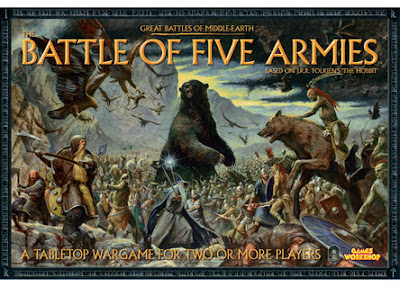 The game itself was produced by Games Workshop (GW) in 2005.  Copies are available on-line, like the one I found on eBay.  Bidding, however, is due to close in just under two days (17 January 2012).  US distrubitors appear to still carry the game, according to GW's website.
Reviews on the complete game average just under 7 on Boardgame Geek's 10-point scale.  The most common observation was this game is based on their Warmaster system.  Or as one reviewer quipped:  "It's Warmaster in Middle Earth." 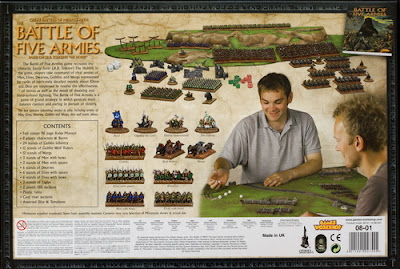 I own several Warmaster rule books, along with bags of unpainted 6mm (millimeter) figures.  Warmaster is based on 10mm, which is too large for my 6mm-scale terrain.  But I figure the rules should work well enough with 6mm figures as with 10mm.  (When it comes to miniatures, I game exclusively in 6mm for large-scale battles and 25/28mm for skirmishes and role playing games).
Flipping through the lavishly illustrated book, I recognized the Warmaster mechanics, before I logged on to Boardgame Geek's page.  I doubt I'll ever buy the game, because of the scale difference, but I'm happy I acquired the rules.  I'm sure GW will roll out more products later thsi year, as The Hobbit's release date draws near.
Posted by Ted Henkle at 1:25 PM No comments:

Star Wars Freedom in the Galaxy: The Heliax Rebellion 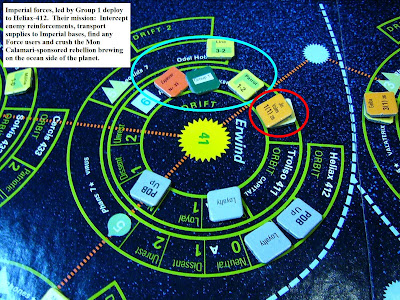 Leroy Jenkins was promoted Grand Moff to Province Four after his predecessor, Argon was killed in a "terrorist attack."  However, Jenkins has been unable to enjoy his new title because a civil war erupted on Heliax-412 between the oceanic side and the mountain side. 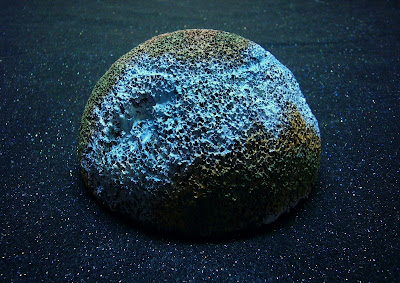 Group1 assembled a task force consisting of a Stardestroyer, a Sith Infiltrator, the Ghtroc-720 freighter Heliax Gambit and the Consular-Class Cruiser LukStar Explorer.  A full compliment of fighters, shuttles and stormtroopers were onboard the Stardestroyer, while the Heliax Gambit and LukStar Explorer were loaded with vital supplies for the Imperial garrisons besieged on Heliax-412. 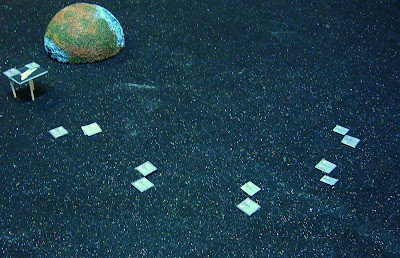 Imperial intelligence reported the Oceanic Rebels were receiving support from the Mon Calamari.  When Group 1 Task Force (G1TF) dropped out of hyperspace, they discovered that for once, Imperial Intelligence was right.  A Mon Calamari MC80 Cruiser was in low orbit transporting mercenaries down to the planet.  Once the cruiser detected G1TF's approach the ship moved to high orbit and launched fighters--the Rebels' new X-Wing. 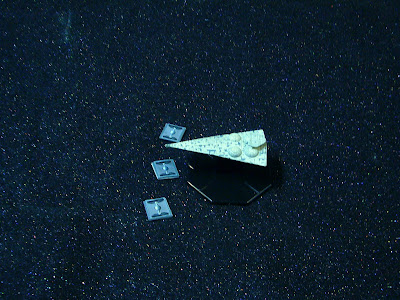 In response, the Stardestroyer launched TIE Fighters, which formed a screen for the assault force dispatched to relieve the Imperial garrisons. 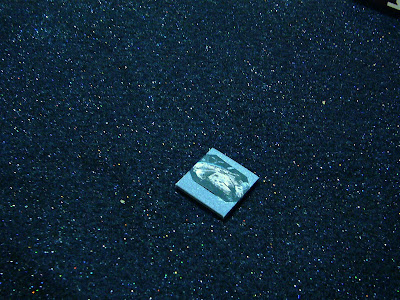 As the opposing ships and fighters raced towards each other, a YT-1300 Freighter dropped out of hyperspace.  Thanks to the advanced sensor array on board the LukStar Explorer, the YT-1300 was identified as the Millennium Falcon, belonging to pirate captain Han Solo.  Thanks to transmission intercepts, the Mon Calamari task force leader was identified as Admiral Ackbar. 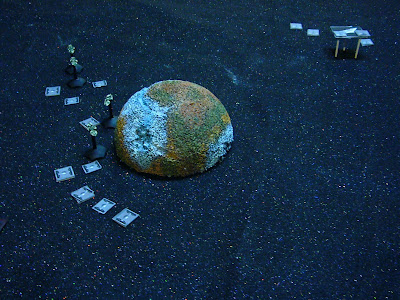 The Imperial assault force successfully evaded the Rebel fighter screen and began landing on Heliax.  Meanwhile, the fighters of the opposing capital ships clustered together as X-wing and TIE Fighter pilots fought to out shoot and outmaneuver each other. Within minutes, the capital ships began blazing away at each other with their turbo lasers. 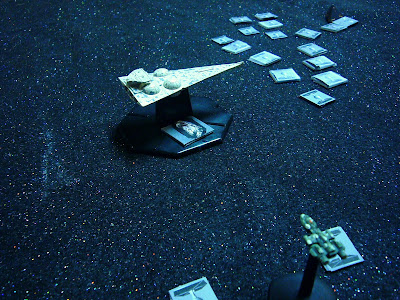 However, not weapon in G1TF was targeting the Mon Calamari cruiser.  The Stardestoyer's ion cannons disabled the Millennium Falcon.  Within minutes a tractor beam latched on to the Rebel freighter.

As the rebel freighter was dragged into the docking bay, TIE Fighters swept the X-Wings from space and the Mon Calamari Cruiser's hyperdrive was disabled by a devestating volley of turbo laser fire.  Sensors on the LukStar Explorer detected escape pods jettisoning from the crippled cruiser.  Imperial ships and fighters veered away from the cruiser, as the last wave of escape pods were launched.  Within minutes the containment field of the cruiser's powerplant failed and ship exploded in a nova-like fireball. 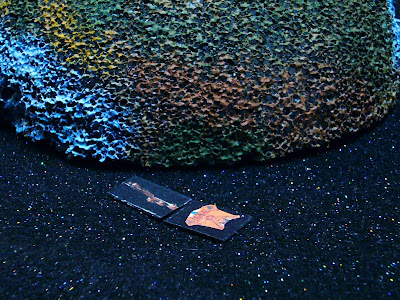 Throughout the battle, the LukStar Explorer and Heliax Gambit remained in close orbit around an asteroid.  Once the glow from the former Mon Calamari Cruiser faded, both vessels got underway and landed on Heliax.

The Rebel mercenaries were soon routed.  The presence of four Force users was detected, but it is unclear as to whether they were captured or killed in combat.
Meanwhile Luke Skywalker and Han Solo, led stormtroopers on a merry chase throughout the Stardestoyer.  Pirate captain Solo was soon captured.  The fate of Admiral Ackbar and Luke Skywalker remain unknown at this time.
Now that the Heliax Rebellion has been crushed, the newly promoted members of Group 1 will settle into their new assignments:
Adjunct Tavore--Moff of Erwind 41
Kyllbacca--General of Erwind Defense Forces
Pepsor--Moff of Voru 43
Quix Ornega--Moff of Deblon 44
Aeros--Moff of Martigna 45
Daedelus--Moff of Wex 42
Tren Luk and Garik Starka--awaiting Imperial contracts for their new firm, LukStar-Lines (LS-L) Shipping Company.
Posted by Ted Henkle at 1:00 AM No comments: 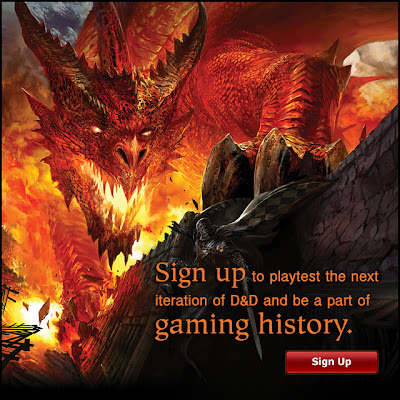 (Image from Wizards of the Coast website--go to actual site to sign up)
Several days ago, Wizards of the Coast (WotC) issued a call to arms for playtesters interested in participating in the next development of Dungeons & Dragons.  This past Monday, articles appeared simultaneously in the NYT, Forbes and on WotC's website.
Shelly Mazzanoble, author of Everything I Need to Know I Learned from Dungeons & Dragons, even hinted at having employed her "part time sorceress" skills to initiate this new edition.
I currently own D&D 3.0, along with some 3.5.  I grabbed a set of 4th edition core rulebooks at a used book store just a few months after the new edition's release.  Not everyone was happy with the new rules.  The most common complaint is that the streamlined rules practically eradicated the role playing aspect of the game.
I haven't played D&D 4.0 yet, so I can't render an opinion.  Hopefully, involving player feedback on such a massive scale, WotC will quell the "Edition Wars" as Dice Monkey calls the emotionally-charged and highly opinionated debates.
Posted by Ted Henkle at 1:25 PM No comments:

Upcoming Novel of The Battle of the Wilderness 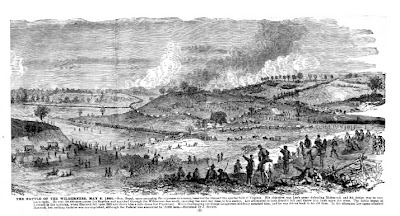 My close friend Lance Weller will have his debut historical novel, Wilderness published this October in the UK.  Lance has been editing, revising and seeking representation in the several years I've known him.

I'm very happy to see that his diligence has paid off.

It gives hope to the rest of us!

Until Lance's novel hits the bookshelves, Wikipedia provides a decent synopsis of the actual battle.
Posted by Ted Henkle at 10:45 AM No comments: 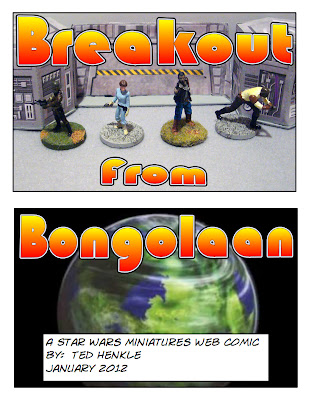 After nearly a year-and-a-half, I finally posted the first chapter of my third on-line graphic novel, Breakout from Bongolaan.  The story is based on the initial Star Wars role playing adventure, set in my Redshift Chronicles Campaign, which can be viewed under my Studio Spin Offs Tab.

Not only did I post Chapter 1, but I launched a "media blitz" and uploaded a "book trailer" on to YouTube.

This is not a typical graphic novel, but an art form known as fumetti, or photonovel.  In this and upcoming stories, I used figures from Wizards of the Coast, Star Wars Miniatures figures, in place of drawings.  I tried to cram in as much narrative and dialogue into each picture without crowding out the image or slowing down the pace.  But I couldn't include all the material I wrote in Pam Binder's Popular Fiction I class.  So I had to do some extensive editing and in most cases relied on images, rather than words, tell the story.

To start things off, I followed the advice of Bob Mayer and introduced the villain first.

Because he sets events in motion.  Remember in Star Wars: Episode IV, we're introduced to Darth Vader, before we meet Luke Skywalker.

So without further adieu, allow me to introduce to you Bunda Akhtar... 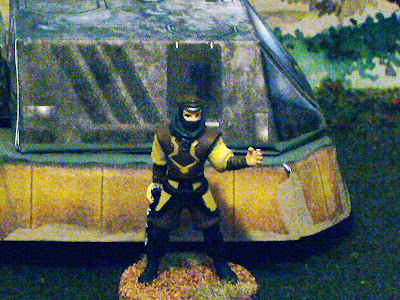 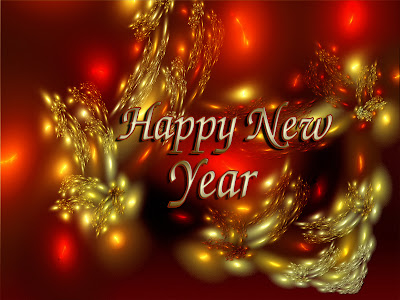