Unlike my delayed entry into Warhammer 40,000 (WH40K), I bought numerous Kill Team items as soon as they became available.
While my Tempestus Scions are my primary Imperial Kill Team, that doesn’t mean the 187th Dragoon Regiment doesn’t have it’s own for localized missions within it’s Area of Operations (AO).
My friend Dan painted several figures for me to represent a pack of Astra Militarum die-hards.
This particular team was derived from the 5-man box set that often provides simple figures to beef-up one’s forces. 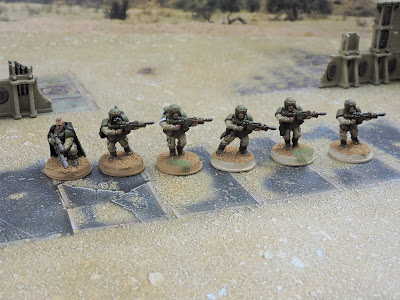 The sixth figure, seen on the left, is a sniper which I purchased as part of a larger collection. Dan converted two of the “filler” soldiers into a medic and demolition specialist.
The regiment’s kill team isn’t a permanent organization.  It’s only assembled when a critical mission needs to be conducted and team members are selected by either volunteers, or more likely, by troopers that have committed infractions that aren’t severe enough to warrant summary executions or exile to a penal legion.
Once the mission is complete, the survivors will return to their original assignments without any blemish to their record, but are warned any further infractions will not be tolerated.
The miscreants will only be given this one chance to redeem themselves.
A review of my “187th Second Chancers,” from left-to-right are the team leader, the demo specialist, medic and three riflemen who may be other types of specialists: 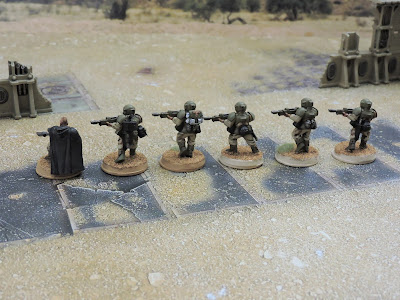 Despite the temporary nature of this group, I decided to name them after some of the main characters from the movie, The Dirty Dozen.
From left to right:
Captain John Reisman (played as a major, by Lee Marvin),
Corporal Joseph Wladislaw (played by Charles Bronson),
Corporal Milo Vladik (played by Tom Busby),
Sergeant Clyde Bowren (played by Richard Jaeckel),
Private Samson Posey (played by Clint Walker), and
Private Victor Franko (played by John Cassavettes).
As of now, there’s no rules in Kill Team regarding vehicles.  I guess because even the smallest vehicle could unbalance a game session.
However,  kill teams have to get from Point A to Point B in order to do their killing.
Since this team is part of an armored cavalry regiment, the best means of transportation would be by modified Chimera command vehicle often "appropriated" for such missions, if one's available. 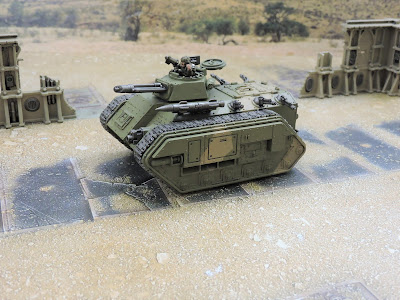 Because the 187th’s Second Chancers will often be deployed beyond the regiment’s Forward Line of Own Troops (FLOT), it’s necessary to provide the team with a means of long range communication.
In addition to it’s turret-mounted laser cannon the Second Chancers’ Chimera is equipped with a hull-mounted heavy bolter, and a Krak Missile—at least at the beginning of the mission. 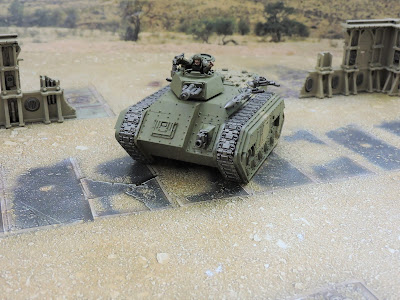 The vehicle is also devoid of unit markings or other colorful displays for a thin attempt at maintaining plausible deniability.
Posted by Ted Henkle at 4:00 AM