Pass and Review: Figures in A Touch of Evil 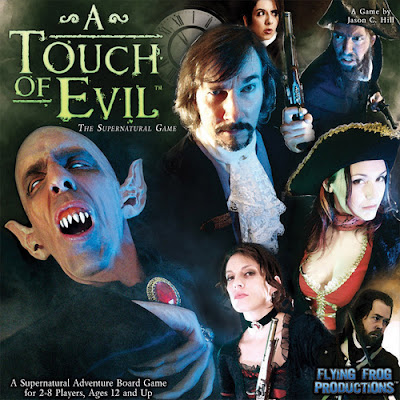 A Touch of Evil (AToE) is an adventure boardgame, set in the late 18th Century.  Players are a band of heroes attempting to find the lair of an evil creature threatening the village of Shadowbrook.  Produced by Flying Frog Productions, AToE received a solid 7.05 out of 10, from over 1800 raters on Boardgame Geek.
I bought this game over a year ago, but sadly, have yet to play it.  A few of us in my gaming group are hoping to take this game for an inaugural spin this Halloween Season.   Through the use of creative photography, Flying Frog created top-notch game components.  In addition to the glossy, cardboard playing pieces, the game comes with 8 high-quality, plastic figures representing the player-heroes.
I was so impressed, I immediately bought the Something Wicked expansion game and the Hero Pack One.
The figures appear to fit in the 25/28mm scale, which make them suitable for other "18th Century Pulp" adventures outside AToE game sessions.With this in mind, I decided to get the miniatures painted to a quality beyond my feeble skills with a brush.  So I turned to my friend, Peter Wort and hired him to do the job.
For this first studio shoot in my new home--and with Halloween being just over month away--I wanted some suitably creepy terrain for a back drop.  I couldn't think of anything creepier than this model graveyard... 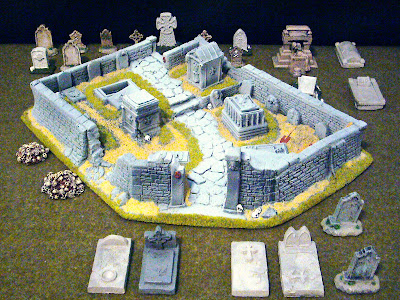 The walled-in graveyard was produced by Games Workshop years ago and I believe, is out of production.  I merely added a few touches of paint and flocking to accentuate the piece.  The headstones, statues and piles of bones outside the wall; were purchased from various manufacturers over the years, to include some Halloween decorations from Michaels.
Now for a look at Peter's artistry, starting with the Touch of Evil core game: 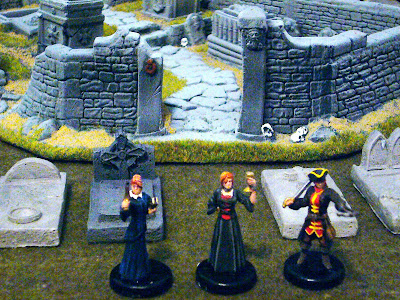 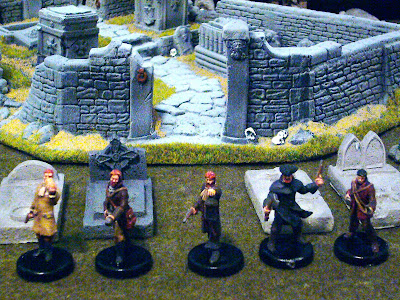 While the heroes among menfolk are--
--Victor Danforth, the Playwright
--Karl, the Soldier
--Inspector Cooke
--Heinrich Cartwright, the Drifter
--Thomas, the Courier
In addition to an extended map of Shadowbrook; along with more villains and minions of evil, Something Wicked adds four new heroes, players can opt to use. 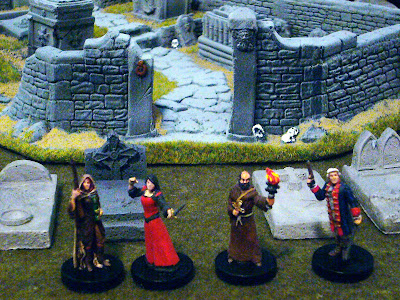 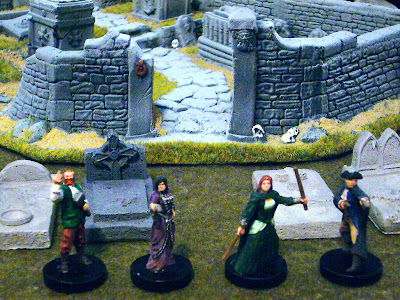 ...which I hope Flying Frog gets around to producing "Hero Pack Two" and so on.  Until then, the beleaguered citizens of Shadowbrook will have to rely on--
--Harlow Morgan, the Inventor
--Lucy Handbrook
--Adrianna, the Foreign Traveler, and,
--The Scarlet Shadow!
I took 43 pictures during this shoot, mostly to experiment with different lighting and flash settings.  I'm currently working on several photos, to post as Halloween cards in the days and weeks to come...
...Bwah-ha-ha-ha...
Oh who am I kidding.  For maniacal laughter, I certainly can't top this guy.
Posted by Ted Henkle at 12:35 PM