I finally got around to assembling and painting some of the large vessels in my Cruel Seas collection.
I started with the few merchant vessels for a couple reasons:
First, such vessels were often the targets of naval battles, so I needed have "objective vessels" ready.
Second, since this is my first time painting ship miniatures, I don't have to be concerned by my lack of skill if they don’t look "ship shape" like a warship would.

The Assembly and Painting Details:

This round of assembly and painting consisted of three ships.
I painted the first of my merchant tankers an overall Army Painter "Stone Golem Gray," using from my Army Painter set. Since I wanted the ship to look grungy and rusty, I splashed on a grey wash, followed by a rust-colored ink-wash.
I'm not sure if I should be proud or embarrassed by the result: 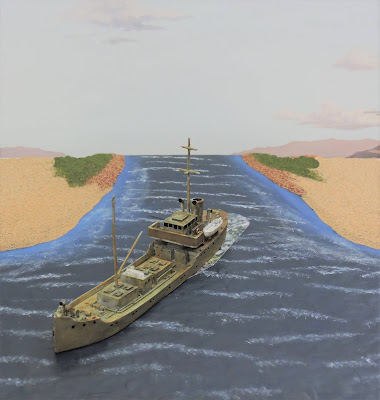 Since I wanted my second tanker to be distinct from the first one, I painted it an overall Army Painter "Electric Blue."  Only this time, I used a little less rust and grunge ink-wash. 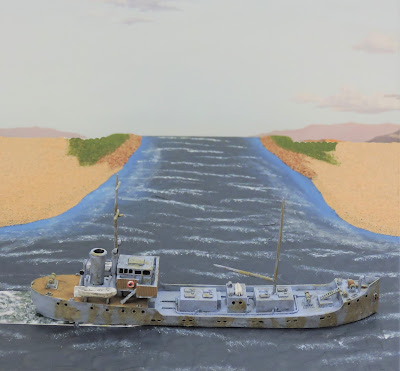 Okay, maybe not so little.

The final ship I painted this round was the convoy freighter.  Instead of the basic black that's featured in the games' ads and data cards, I painted the hull Army Painter "Crystal Blue," and the metal deck "Spaceship Exterior." 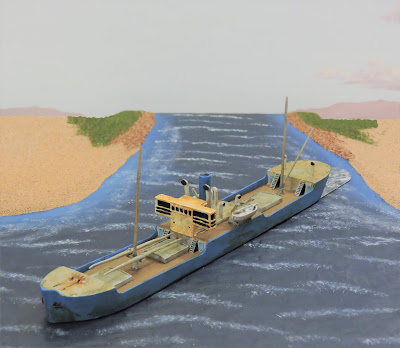 The superstructure is suppose to be a basic white, but I still managed to splash-on more rust and grunge than I intended.

The wooden decks on all the ships were painted with Reaper Miniatures "Leather" color.

Overall, I'm happy with the results, despite the excess of rust and grunge.

For my photo shoot, I placed a model railroad backdrop in such a way that only the hilltops were exposed above the horizon.  The river mouth/coastline terrain was made by Wizard Kraft, who're regular vendors at our annual NHMGS Enfilade! convention.

(Note:  The Wizard Kraft website was being revamped when I wrote this).

These were the largest micro-scale-ish figures (1/300 scale) I've assembled and painted.  While these ships are solid resin, you still have handle them with care.  This is because extensions like masts, cranes and antennas are spindly, and are easy to bend and break.  I had to splice the forward crane of the convoy freighter with superglue.

I had some trouble assembling the ships.  The holes for the accessory items, like smoke stacks, masts, and lifeboat cranes were too small to mount them without a bit of work.  I used a dental pick I managed to acquire to widen the holes, and employed an excess amount of superglue to get items mounted securely.

Anyone with a Dremel Tool probably won't have any trouble at all widening the various holes.

Some of the ships came with large flanges as a result of emerging from their molds.  But unlike my lack of a power tool, my Army Painter precision side cutter made short work of the excess resin.

Despite playing miniature games since I was a teenager, I still feel like a padawan when it comes to actually painting figures.  Which is why I try to hire others to do my dirty work.

What I had the most fun doing was concocting names for these ships and their captains.

Since the first one looked like it's barely seaworthy, I picked a name that could cause players the most headaches.

The only "logical" conclusion was to name the rust-bucket Kobayashi Maru.

Now before I'm accused of "going full-Trekkie," there actually is a bulk carrier by this name.

Now, who would dumb brave enough to skipper such a bucket of bolts?
Since I derived the ship's name from the Star Trek Cinematic Universe, I naturally assumed a Star Trek-inspired character should be the Kobayashi Maru's captain.
And who better to skipper a ship of questionable origins, seaworthiness and legal business dealings than Harcourt Fenton Mudd? 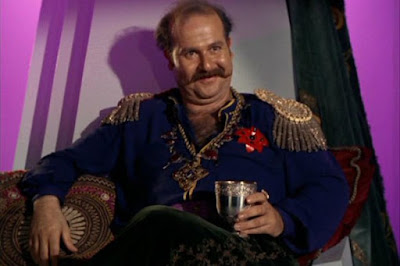 Or more likely, one of Harry's scheming ancestors.
In my world of Cruel Seas, Harry Mudd claimed he found the Kobayashi Maru aground and abandoned on the Great Barrier Reef "sometime before the war started."  On the other hand, Imperial Japanese officials claimed Mudd stole the ship, but oddly enough didn't pursue the matter any further.
Merchant Tanker #2:
I was inspired to name the next ship after the oil tanker, SS Northern Star, from Action in the North Atlantic, because of it's icy-blue appearance.
True, the ship--spoiler alert--gets torpedoed by a U-boat in the beginning of the film.
But since wargaming can be about "re-writing history," why not re-write a war movie?
Of course, the Northern Star has to be skippered by a Humphrey Bogart character.  However, in this movie, Bogey was only the ship's First Officer, Joe Rossi, to Raymond Massey's Captain, Steve Jarvis. 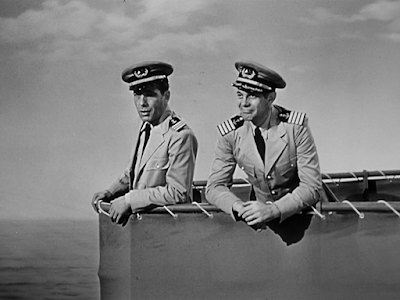 Then I remembered the line in Casablanca:  Where Bogey's character, Rick Blaine, was reminded that"...in 1935, you ran guns to Ethiopia" 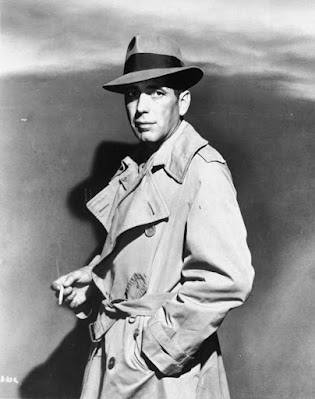 Now how did Rick get those guns to Ethiopia?
It "must" have been by ship.
So by twisting movie plots, and characters to fit my Cruel Seas world, I have the Northern Star skippered by Rick Blaine.  Probably before he met Ilsa, for 1930s pulp adventures, and then is back on board as part of his "...beautiful friendship..." with Louis when the war gets into full-swing.
The Convoy Freighter:
I have to admit this is my favorite ship; not so much for it's looks, but for the backstory I concocted for it.
I couldn't resist christening this vessel the Bantu Wind, the freighter seen in Raiders of the Lost Ark.
I know the convoy freighter doesn't look exactly like the ship in the movie... 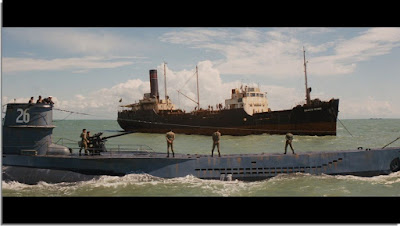 ...but it's close enough for tabletop gaming purposes.
And unlike my previous mixing and matching of ships and characters, I couldn't have the Bantu Wind captained by anyone else but Simon Katanga.

He's way too good of a character to "toss overboard."
All three vessels are now ready to put to sea for risky enterprises.
As I get ready to begin painting warships for my Cruel Seas world, here's my version of the Bantu Wind, sailing off on another misadventure... 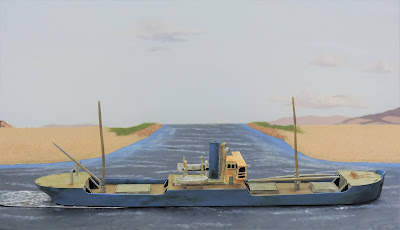