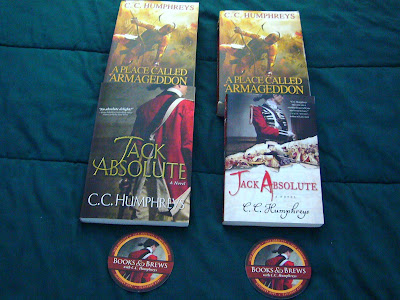 A few nights ago, I drove up to Third Place Books (Ravenna) to attend the finale of Chris Humphreys' "Books & Brews" Tour.  This event was to promote the re-release of his Revolutionary War novel, Jack Absolute.

I read and reviewed this book nearly four years ago, shortly after meeting Chris at the PNWA Writers Conference.

Despite the typical rush hour traffic and intermittent rain, I arrived at Third Place Books with 15 minutes to spare, barely enough time to order--but not eat--dinner from Vios Cafe, before Chris showed up.

About eight of us gathered in the impromptu auditorium set up by the Third Place staff.  Two of my fellow attendees were local authors Terry Persun and his daughter, Nicole--both are very active in PNWA.

I tried not to munch on my souvlaki too loudly, as Chris discussed the origins of the character Jack Absolute, his writing/researching processes and most of all--reading excerpts from his work.

Most writers describe themselves as introverts and tend to shy away from public speaking.  Sometimes in a manner similar to a vampire reacting to a crucifix.

Chris, on the otherhand, has been an actor, practically since birth.  (His father and all his grandparents were actors).  So Chris doesn't just read from his books--he performs!  The voice inflections he employs helps the audience distinguish who's doing the talking during dialogues.  He can employ accents and dialects without sounding hammy--like I do when I'm involved in a role-playing game.

Even if you don't buy any of Chris's books--but I highly recommend that you do--it's worth checking out whatever venue he's attending, just to hear him read.

Once the hour-long session was over, Chris, the Persuns and I chatted for nearly an additional hour while I got my second copy of Jack Absolute and A Place Called Armageddon autographed for my wife, Janet.

A Place Called Armageddon is very special to Janet and I, because it was the conversation piece that brought us together.

So while Chris was signing, I ended up hogging most of the conversation telling the tale of how my wife and I met to Terry, Nicole and her boyfriend...

...I started attending a new gym after my divorce and relocation a couple years ago.  Janet started showing up a month or so after I did.  She was training for a triathlon she wanted to run with her son.  As we found out later, we both noticed each other right away.

The first time we spoke, I was on a chest-press machine as Janet walked by and said, "Have a good workout."

I could have sworn I said, "Thank you miss," but according to Janet's recollection I said "Thank you ma'am."

Anyway, he said/she said aside, I thought she was merely being nice, so it wasn't until our second encounter that Armageddon came into play.  A week or so later, was peddling away on a stationary cycle reading this book.  As Janet walked by, she suddenly stopped, did an abrupt right-face, walked up to me an blurted, "How's the book you're reading?"

Now, it's not an every day occurrence that a beautiful woman approaches me and inquires about my reading material.  So I was taken aback by her sudden approach.

Needless to say, it wasn't my best book review.  But she smiled anyway and said, "Enjoy your book and have a good workout."

After this encounter, I made it a point to approach her and say hello.  Then we started working out together on adjacent elliptical machines, which led to a first date a couple weeks before Christmas.  Janet asked me out by inviting me to her place for dinner and a game of Scrabble.

Why a game of Scrabble?

Well, somewhere during our Courtship Phase, when I told Janet I was a table-top gamer (as opposed to a computer/video gamer), she was thinking of games such as, Monopoly, Life and Scrabble...

...not the "Blood and Swash" kind of stuff I've played, like War Cry and Battle Lust, Skull & Crossbones, A Touch of Evil or Zombies!!!

Experience with these games however, provided no help for me whatsoever, when after dinner, Janet broke out her Deluxe Scrabble Board and her Official Scrabble Player's Dictionary.

Other dates soon followed.  Then, with just a few hours remaining of the Old Year, our friendly relationship took on a romantic trajectory--and concluded with our wedding.

We got married a few months ago and A Place Called Armageddon had a place of honor at our ceremony... 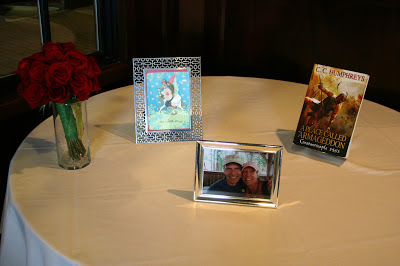 So buy one of Chris Humphreys' novels and read it in public!
Who knows?  Someone special may walk into your life and ask you about the book you're reading.
Posted by Ted Henkle at 7:30 AM

I loved that story, by the way. Stories about how people meet are often interesting, sometimes cute, sometimes romantic, but always with a happy ending. It was good to see you again.

Great story! And Great book, I am half way through "A place called Armageddon myself"
I guess I will check out his other novels then to.

Thank you for your comments guys!

Commissarmoody: Chris's book, "Vlad the Last Confession of Dracula," is set during the same timeframe. It's a fascinating look at the real Count Dracula.

Terry: It was great seeing you too! Like you, I find how people meet to be one of the most interesting aspects in a story.