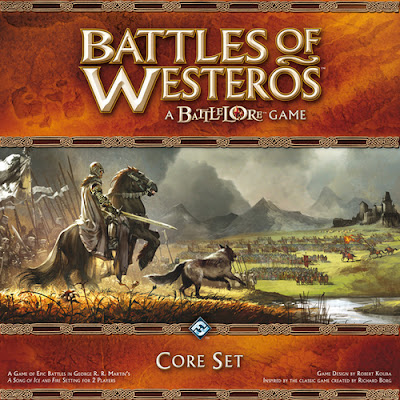 This is the primary reason why I liked the novel A Game of Thrones:  The world of Westeros is overflowing with wargaming potential.
I got my first good look at the Battles of Westeros, by Fantasy Flight Games (FFG), while visiting my friend Joe.  After checking the ratings on BoardGameGeek, I decided not only to buy the core set, but all the supplements.  These are:  Wardens of the West, Wardens of the North, The Lords of the River and the newly released Tribes of the Vale.
http://boardgamegeek.com/boardgame/67492/battles-of-westeros
From what I've read, the game mechanics are similar to FFG's Battlelore line of products:
http://boardgamegeek.com/boardgame/25417/battlelore
Despite the expense of buying the core set and all the supplements in one, fell-swoop, I'm glad I did.  I finished cutting out all the cardboard terrain and tokens and assembled all the miniatures.  The figures, which represent some unique troops among the warring Lannister and Stark families, along with their allies.  The only issue is the figures have to be mounted on bases which can be a little tricky, since the pegs don't always match the holes.  Based on this warning, I read prior to opening any of the boxes, I didn't think twice about gluing the figures to the bases.
Apparently, there were some complaints about the cardboard flags used to group figures into units often wore out due to frequent use.  So FFG created a box of plastic, deluxe flags (which I also bought), to go with the core game and first two, "warden" supplements.  Newer supplements now come with their own deluxe flags.
I'm looking forward to waging table-top war in Westeros and of course, writing after action reviews on each battle.  Alas, with all my other writing and gaming projects, I don't know when that will be.  In the meantime, Anatoli of Sweden, wrote a short after action review (AAR) of the game's ambush scenario, Battle of the Whispering Woods:
http://anatolisgameroom.blogspot.com/2011/05/battles-of-westeros-battle-of.html
For more information on Battles of Westeros and other games, check out Fantasy Flight Games website:
http://www.fantasyflightgames.com/
Posted by Ted Henkle at 1:00 AM

Played the ACW 'Battlecry' version of this and I have to say I was pleasantly surprised how great the game is. The mechanic means a good balance between frustration and nervous anticipation.

From reading the rules, I'd describe the game mechanics as simple, yet elegant. I'm looking forward to playing this one!