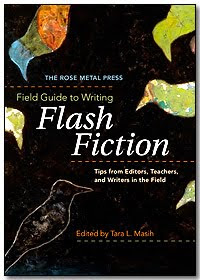 The Rose Metal Press Field Guide to Writing Flash Fiction is a collection of 25 essays on the subject:

The definition varies, but it's often called a short-short story, with a word-count ranging from 250-1,000 words:

In fact, the introduction of this field guide, by Editor Tara L. Misah, is the longest chapter in the entire book, weighing-in at 26 pages. Despite its length, Ms. Misah provides the reader with an interesting history of flash fiction. Short stories gained popularity around the turn of the 20th Century with the publication of weekly magazines. These periodicals, however, began dying-off as television became a more popular form of entertainment. Despite the proliferation of the internet, flash fiction now provides a reader with a story in short amount of time, or "as long as it takes to smoke a cigarette."

As to the field guide itself, I found the essays useful and informative. Each essay ranged from 3-9 pages, which included a writing prompt and an example of flash fiction. As you could expect, the authors had some differences of opinion on what makes an effective short-short story. What they did agree on, was that each story should be thought-provoking and leave the reader with an indelible image.

I found most of the story examples, "thought provoking" alright. My usual responses were, "huh?" or even, "WTF was that all about?"

I guess I'm not the literary type. I'm not into deciphering an author's meaning and images in his or her story.

My favorite was Inside Job by Pamela Painter. In this flash, a university couple are attending a party. After noticing her husband hit on another one of his graduate students, Marla goes into the kitchen to grab a drink, but accidently douses her blouse with seltzer water. One of Marla's graduate students tries to help dab off the water and she guides his hand--underneath her blouse.

Talk about an "indelible image!"

I rate this book a solid four stars. This is more out of personal bias. With the exception of Inside Job, it's hard for me to get excited over a textbook. However, for anyone interested in writing flash fiction, or improving their craft in this niche-genre, this is an invaluable guide.
Posted by Ted Henkle at 8:45 PM