I’ve had mixed feelings about the Western genre my whole life.  While I like western movies, I’ve only read one or two western novels, and a handful of comic books.
The same goes for gaming.
During my teen years, my friend Jim hosted rousing western games, like Boot Hill... 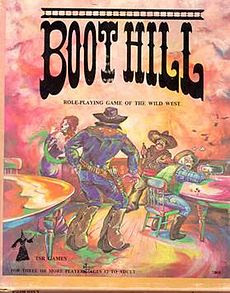 ...and Gunslinger, that my fellow “eastern city-slickers” and I still remember with great fondness. 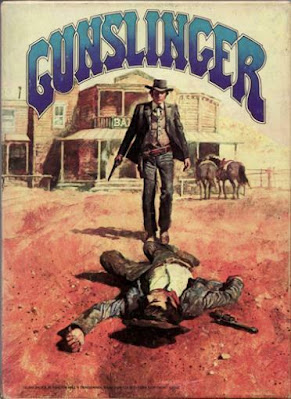 But I never bought my own copies, nor purchased any figures or terrain.  Gunslinger was a tabletop game using cardboard counters and a map board, while we played Boothill old-school style—with papers and pencils.
So after I left my hometown, my interest in Old West skirmish games or role-playing games (RPGs) went into hiatus.
Until now.
It’s not a question of whether or not I like the genre, I do.  It’s a problem of my limited storage space, prioritizing my meagre gaming time and finding a group interested in playing.
Maybe my interest in the Old West was rekindled when I finally got to see the remakes of  True Grit, and The Magnificent Seven, along with Hostiles.
While I still prefer the original movies over the remakes, I thought the recent reboots did a credible job.
Whatever my true motivations were, I managed to get a copy of Legends of the Old West... 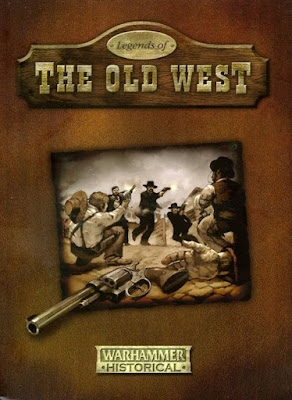 ...at Half Price Books for a reasonable price, and was able to cram it into a spot on my bookshelf.
Even though I was armed with a set of rules, it took two more years to buy the few western figures from Reaper Miniatures that I stumbled across at The Game Matrix.
Thanks to my friend Peter’s painting skills, I now have the cadre of an Old West posse.
The three figures are from Reaper Miniatures’  Savage Worlds line, geared for Pinnacle Entertainment’s Deadlands, a Weird West (Wikipedia) sub-genre of the Savage Worlds RPG.
Here’s the final results:
1.  I think this is "Stone."  If so, then Peter painted him as a normal human instead of an undead gunslinger. 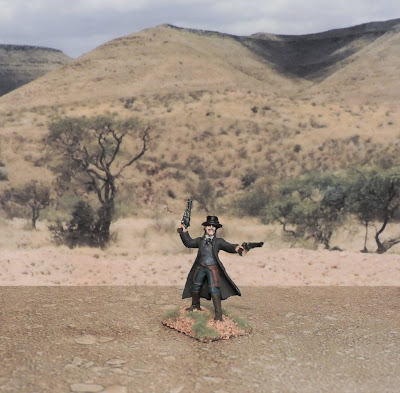 The back view of “Stone:” 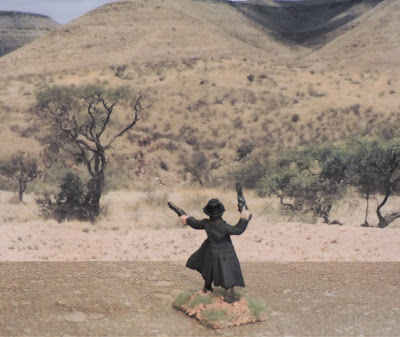 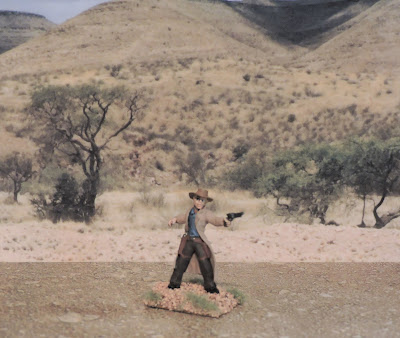 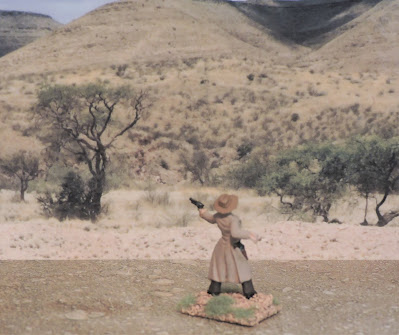 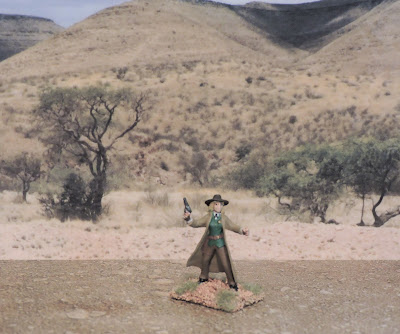 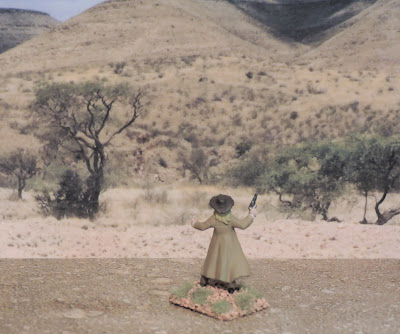 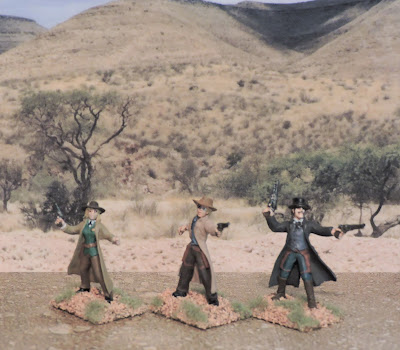 As with the fantasy figures I reviewed in my last post, I superglued heavier square bases to the figures’ original ones, then painted and flocked them.

The backdrop for this photoshoot is the same one I used for my Warhammer 40K collection, which is a terrarium background I bought at a local Pet Smart.

The desert floor was considerably more expensive, but is the same Kill Team Sectors Fronteris gameboard I used for my Warhammer 40K photo shoots.