A Visit to the EMP's Star Trek Exhibit

A couple of weeks ago, I waxed poetic about Star Trek's Golden Anniversary.

Even though I still haven't seen Star Trek Beyond yet, I did manage to go to the Star Trek: Exploring New Worlds exhibit at Seattle's EMP Museum (Experience Music Project).

I was hoping to venture up to the Emerald City on Star Trek's exact anniversary day, but my wife and I were too busy.  However, we both had last weekend off while her sister and brother-in-law were visiting us.  This turned out to be the perfect outing for all of us since we grew grew up watching the show.

The museum allowed visitors to take photographs, but did not allow the use of camera flashes.  I don't like using the flash anyway, so this didn't bother me initially.

However, the exhibit hall was very dark.  As a result, I had to max out nearly every editing function on my computer to make the subjects of each picture discernible.  This process took over a dozen hours of sifting through 149 photos.  Even with 89 usable pictures, it was difficult to obtain a good image without some video reflection, or lens-flare from an overhead light.

What follows is a sample montage of our adventure.

The "History" of Star Trek

The Federation's opponents ranged from worth Cold War Era stand-ins...


...along with the misunderstood...

Sometimes our enemies are our darker selves. 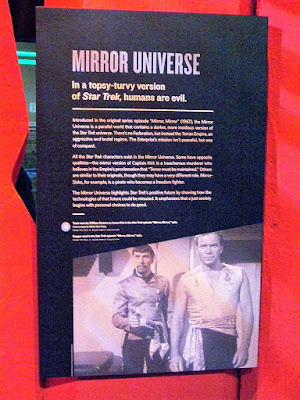 But the best Star Trek nemesis by far is...

...well, at least the original.

What I found most remarkable about the props used in Star Trek was--how unremarkable they are.


After half-a-century, they even look shoddy compared to more updated props. 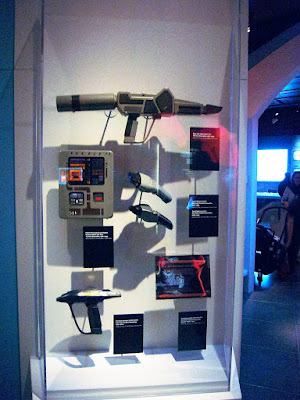 However, this is what makes them so amazing.  That a pop culture phenomena was launched on such an small budget, making due with whatever the prop manager could cobble together.

Oddly enough, the exhibit I, my family and even a coworker liked the most was this diorama showing how the Enterprise Set was arranged.

Here's another reason to "love Lucy:"

In addition to scampering through a futuristic crawlspace one can even star in their own "movie," which consists of virtually beaming down to some hostile environment and resolve a critical situation that only main characters can accomplish.

In this story, I drew the short straw heroically volunteered to beam aboard a damaged freighter about to crash into an inhabited planet.  My assignment was to destroy the ship's Phlebotinum Core--with a hand phaser--before it reached the planet's atmosphere.

My mission was a success, probably because I wasn't wearing a Red Shirt for this operation. (I tried uploading the video my wife took, but I couldn't get it to play here on Blogger).

Speaking of attire, I didn't see any cosplayers at the exhibit, but back in May there was an opening day costume party.

The Star Trek:  Exploring New Worlds exhibit will continue at the EMP through 17 February 2017.
Posted by Ted Henkle at 4:00 AM