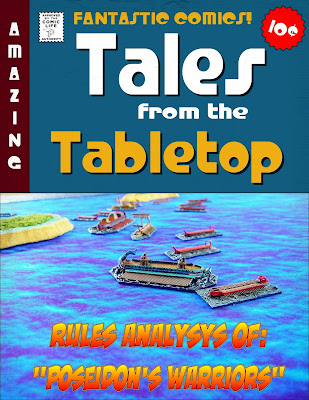 My last post, which I hope you enjoyed, was a heavily slightly embellished account of what happened during our initial play-through of Poseidon's Warriors.

This post will be a nuts & bolts examination of how and why things happened during the game.  Basically, this is a more in-depth look at the rules compared to my first impression.

Since Poseidon's Warriors "...is a set of rules for playing large-scale naval actions between fleets of classical galleys..." let's first examine the figures we used in the game.

The ship's used were part of a collection Dean acquired from a sale on The Miniatures Page (TMP), and consisted of:

2 x 1/900-scale fleet flagships by Valiant Enterprise's Ramming Speed Series
5 x 1/1200  squadron flagships by Langton Miniatures, while the rest were 1/1200-scale ships from CnC (which, sadly, appear to be no longer in production).

My contribution to our tabletop classical war-at-sea effort was the terrain.

Several months ago, I stumbled across a 6' x 4' Ocean F.A.T Mat by Frontline Gaming.  Just as I was heading out the door to Dean's house, I remembered some other terrain pieces I had, and hastily grabbed what I could before dashing out the door.  These items were beaches from Wizard Kraft Modular Terrain and a handful of homemade islands I bought from a private vendor during some past visit to our Enfilade convention.

We didn't bother with the Point System of the Ship Data Summary Chart, found on page 11 and on the back of the Quick Reference Sheet (QRS, page 64).  Instead, we decided on an identical number of ships and types, which turned to be:

We, well, I chose Scenario 4:  Channel Dash (pages 32-33) for us to play.  I have to admit that my ulterior motive was to use as much of the terrain I brought over as I could get away with.  This was the first time any of these pieces saw the light of day on a game table, and I didn't want this opportunity to go by the wayside.

Looking back, I realized we deployed our fleets incorrectly for this scenario.  (This wasn't the only thing we muddled up in the game).  According to the Special Rules, we were suppose to place our ships in one long "line astern," along opposite coastlines, and stay in this formation, moving forward, based on the Aggression Number we each secretly chose (from 1-6) combined with the current turn number. 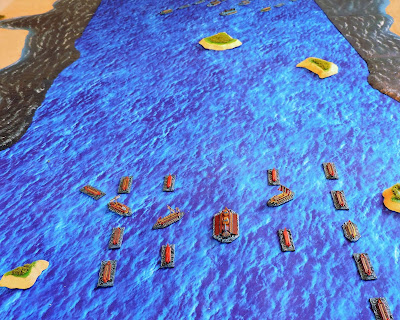 ...so it took 8 turns in a 6 turn game just to get within artillery range of each other.  If that is, we had any artillery on our ships.  Another reason for the delayed approach was due to the slow speed of our flagships, and our desire to have our respective fleets keep station with them. 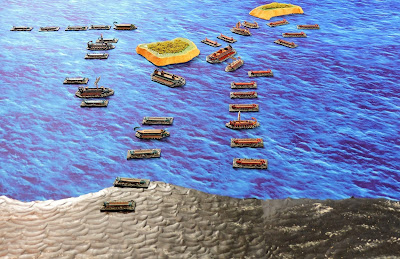 Once five of Dean's ships opened the battle by head-on ramming four of my ships, it was all over in three turns. 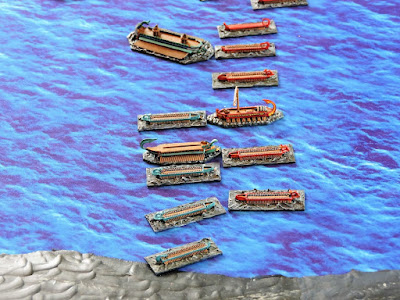 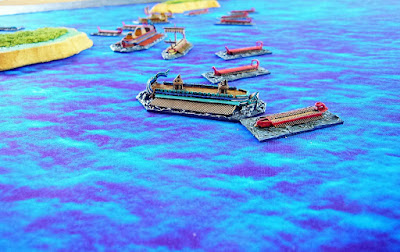 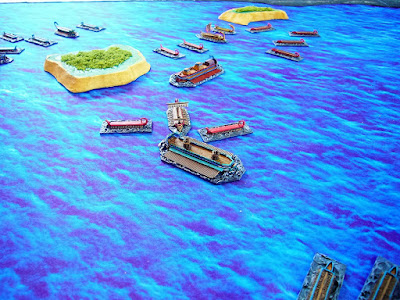 A Glance at the Game Mechanics

Our fleets spent most of the time closing on each other.  But once battle was joined, we sort-of followed the turn sequence, which is divided into three phases.

Phase 1--Initiative:
Each player rolls a die, with the highest roller deciding whether to go first or not.

Phase 2--Operational:
Players alternate moving each of their squadrons, (Dean and I move our whole fleets until we discovered our error), and conduct actions in the following sub-phases--
--Movement
--Artillery
--Oar Strikes
--Rams
--Boarding

Phase 3--Morale:
Players make are required to make a morale check when a significant number of casualties are incurred.

In our game, by the end of the third turn of combat, both of us had to make morale checks, based on the prerequisites listed on page 17 and the QRS.  I lost over 1/4 of the ships in my fleet, while Dean's flagship was sunk.  In a stroke of rare good luck for me, I passed my morale check, but Dean didn't, which meant that his fleet took flight.

So victory was decided by a single die roll.

We were surprised at how quick and lethal ram attacks could be.  According to the rules on ramming (page 13), warships can make 1-4 "ram strikes" per attack, based on a vessel's size.

Once rammed, the defending player has to roll a six-sided die (d6) for each strike and make a saving throw in order to avoid damage.  Several of the smaller ship types only have one hull point.  So if a player blows his saving throw the ship sinks.  Some can't even make a saving throw, so they sink automatically if rammed.  The medium-sized ships have two hull points, while the massive Deceres and larger Polyremes have three or four.

For a 64-page book selling for about $20, Dean and I thought Poseidon's Warriors was a "convention-friendly" set of rules.  That is, the rules are simple enough for a gamemaster to run a massive session commanded by table-top land-lubbers, and bring the game to a decisive conclusion before the period ends.

Since Poseidon's Warriors is only 64 pages long, Dean and I felt the "Fluff" (backstory/history) could have been eliminated, or at least reduced more, in favor of a tad more "Crunch" (game mechanics).  Instead of artwork, like this found on page 15... 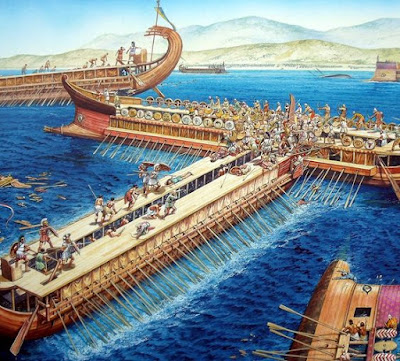 ...while evocative; maps, diagrams and examples of play would have been more helpful, especially in understanding the scenario set up.

We also had a question about command and control.  Ships are organized into squadrons of 1-5 vessels, depending on size, which are suppose to remain within 2 inches of each other, in the case of a multi-ship squadron.  However, there's no other requirement, which made us wonder how far apart can squadrons be from each other, or the flagship.

Even though no merchant/transports were used in our game, being an Age-of-Sail enthusiast, I'm still not crazy about these vessels moving "...in any direction irrespective of the wind" (page 21, in the Advanced Rules).  This is unrealistic, because it gives sail-powered ships the ability to turn back around and flee from danger.  A small change of "...in any direction, except heading [within an easy-to-identify azimuth, say 60 or 90 degrees], into the wind..." would have been within Poseidon's Warriors play-ability parameters.

There's one other issue regarding this small rulebook that I mentioned in my first impression post--the font size.  The print in Poseidon's Warriors is small, I'm guessing size-10, and the charts are at least two sizes smaller.  In my rush to reach Dean's place, I forgot my bifocal reading glasses.  During the game we had to hold the rulebook at arm's length to see the fine print.

Despite these quibbles, Dean and I liked the rules and thought the author, John Lambshead, accomplished what he set out to do--provide a playable set of rules for large-scale classical naval battles.  (Designer's Notes can be found on pages 86-87 in Issue #346 of Wargames Illustrated).

In addition to the Channel Dash Scenario I insisted we decided on playing, there are 5 more generic scenarios featured on pages 27-38, along with an outline for a campaign, and historical scenarios on pages 38-60.

A Suggested Reading List For Scenario Ideas is on page 61.

But if pouring over dusty tomes isn't your amphora of wine, you can glean and adopt scenario ideas from GMT's War Galley Living Rules Page and Great Battles of History (GBoH) Scenario Page.

Another rules review can be found on Rams, Ravens and Wrecks.

One final bit of advice for Poseidon's Warriors:  Don't get rammed!