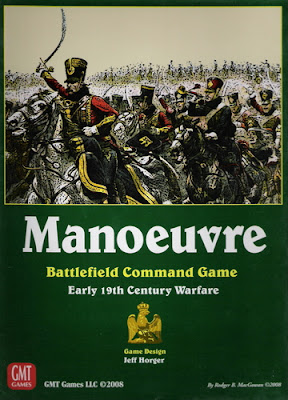 Last week, my copy of GMT's Manoeuvre arrived.  While the game has been available for several years, I've held-off buying the game until I stumbled across it on the Miniatures Market for nearly $20 off.

I haven't punched out the counters yet, but I repackaged the playing cards and geomorphic map sections.  It took me exactly 40 minutes to read the 20 page rule booklet.  I know this because I was on a stationary cardio machine while I was reading.

Manoeuvre is a simple game loosely based on early 19th Century warfare, primarily the Napoleonic Wars and the War of 1812.  It's something like a cross between chess, with an 8-square x 8-square map board, and De Bellis Antiquitatis (DBA), in that armies are comprised of a set-number of units, in this case 8 regiments each.

These armies come from the following nations:  America, Austria, Britain, France, Prussia, the Ottoman Empire, Russia and Spain. Each army consists of a mixture of infantry and cavalry regiments, most of which are in a ratio of 6 x infantry to 2 x cavalry.  The exceptions are the American Army with only one cavalry regiment supporting 7 x infantry, and the Ottoman Empire with an even split of infantry and cavalry, of 4 each.

Artillery is represented by Bombardment Cards some regiments may have within a card deck.

And speaking of cards, movement and combat is initiated by any of the 8 army card decks.  These can be unit-specific, or overall command, or "HQ" type of cards, which can, depending on the nationality, can include spies, ambushes, guerrillas and famous leaders who "ride-in," inspire the troops and "ride-off."

My initial impressions of Manoeuvre is that this is an easy game to learn, but hard to master, which can be played within 40-120 minutes.  According to the rules, it may take up to two hours to play the initial game, with the playtime decreasing by about 5 minutes after each subsequent session.

I've whined constantly mentioned occasionally on this blog about my shortage of game time due integrating my rotating work schedule with that of my gaming buddies.  So a quickie game that can be whipped-up, completed, and put away within a couple of hours can fit into my limited gaming time.

The sturdy box and small assembled map board makes Manoeuvre highly portable.  Excellent for road trips, like to gaming conventions or to historical sites, and one you could play in your hotel room.

Despite the game's merits, there are some detracting aspects of Manoeuvre.   While the game gets an average 4.4-stars out of 5 rating, on GMT's site, there was one 2-star rating that I took note of.  His main complaint was about the small cards and flimsy map sections.  The 8-square by 8-square battlefield is assembled using 4 card stock map sections.

I certainly couldn't read the cards without my glasses, and I can see where players have to be careful about maneuvering in Manoeuvre, lest they jostle the assembled map board.  Laying down a sheet of plexi-glass may keep the map section in place, but certainly reduces the game's "portability factor."

As an aside, one of the problems I have with using plexi-glass is that it makes picture taking rather difficult.  It seems no matter what I do, there's always a glare-spot somewhere, even when I turn off the lights.  This may be due to my lack of photographic skill, but this would be a subject for another blogpost.

I'm not a huge fan of square-based maps in boardgames, especially since diagonal maneuvers aren't allowed in Manoeuvre.  On the one hand this simplifies players' movement options, but it also seems to make movement limited and clunky.  However, since I haven't played the game yet, I'll hold off on judging this aspect for the time being.

Anyway, despite these concerns I'm happy with my purchase and have pre-ordered the upcoming Manoeuvre: Distant Lands Expansion. 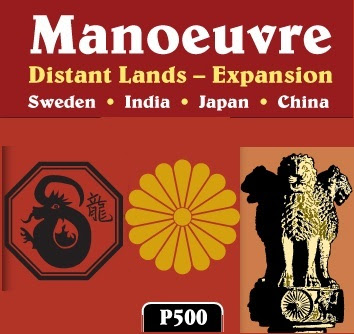 In the meantime, before taking the fight to distant lands, the original game can still be found, in prices ranging from $30 to $50; along with some fan-made supplemental material which can be found on BoardgameGeek.
Posted by Ted Henkle at 7:30 AM